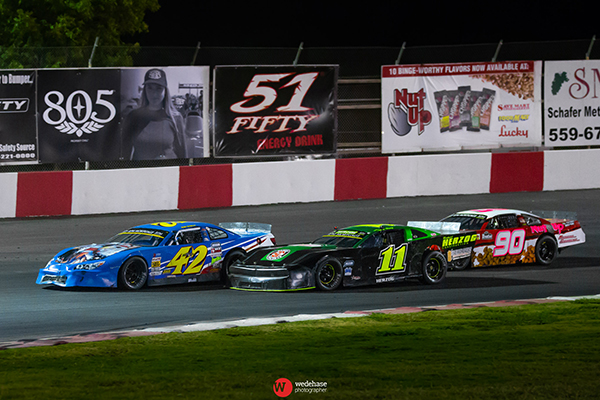 MADERA, CALIFORNIA (September 22, 2018) – Two of the most dramatic finishes of 2018 came during the penultimate rounds of the 51FIFTY Energy Drink Jr. Late Model Series and the RPM Mortgage Pro Late Model Series on Saturday night at Madera Speedway. When the smoke cleared, Dylan Zampa and Matt Erickson emerged with critical victories in their runs for the championships.

For Erickson and the Pro Late Model drivers, they are staring down the upcoming $10,000 to win Nut Industries Short Track Shootout on October 6th.

13 year-old Jesse Love started the Pro Late Model feature from the pole position for their 80 lap affair, but Modesto’s Garland Tyler swooped past him on the outside to take the lead. Love was undeterred, fighting back on the inside to take the lead back on lap five. Erickson followed suit to take second place while sixth starting Austin Herzog, the incoming second in points, was up to fourth on lap 14.

Erickson closed down on Love by lap 18 and used the lapped traffic to box Love, taking over the lead on lap 24. Nick Grossi spun in turn four on lap 32 for the first caution with Loren Kutz collected as well.

When action resumed, Racin Vernon dove to the pits with a blown engine while Love had to retire with failing brakes. April winner Blaine Rocha and Ross Strmiska battled for fourth with Strmiska staying on the high-side for several laps.

A multi-car melee on the backstretch saw Howard Holden and Jarrett Gilmer both suffer significant damage on lap 37. Herzog knifed up into second on the restart and ran on top of Erickson nose-to-tail when they reached the lap 50 break. Tyler, Strmiska, and Rocha rounded out the top-five.

Strmiska took over third coming out of the break. Tyler fell into the clutches of a very strong battle with Rocha and Aguirre where they fanned out nearly three-wide on more than half a dozen occasions. The battle lasted for 15 laps until the next caution.

Jack Wood spun on lap 65 for the yellow flag and Strmiska tried to take second away from Herzog on the restart. Strmiska grabbed the position by lap 70 but Herzog edged back underneath him.

Herzog had second by a nose at the stripe on lap 75 when the caution came out for Gilmer and Kutz stopped on the front stretch. Herzog tried to capitalize on the following restart but Erickson drove away, before another caution on lap 76 for Tyler Herzog spinning.

Herzog drove up alongside Erickson for a side-by-side run to the finish. The pair got tight coming to the white flag, backing Herzog into Strmiska down the front stretch. Herzog spun and tagged Strmiska, sending Strmiska’s car hard into the turn one wall. The race was ended on a yellow checkered flag with Matt Erickson taking the $2,000 victory ahead of Rocha, 15th starting Dillon Tucker, Aguirre, and Logan Zampa. Herzog was unofficially credited with a distant 14th place in the final rundown.

The 51FIFTY Energy Drink Jr. Late Model finish was similarly spectacular, with cars sliding across the finish line backwards. In the end, Dylan Zampa was credited with the narrowest of victories by .017 seconds over a spinning Tanner Reif.

Joey Iest started the 70 lap race for drivers ages 10-16 from the pole position, but was immediately passed by his teammate Jesse Love. The move was nullified by a caution, but Love, the 2017 champion, made the move again on the next attempt. Dylan Zampa followed him past Iest with the top-two in the points occupying the top-two on the race track.

A significant crash on lap four brought out a red flag when Calvin Hegje and Hailey Liles bounced off the front stretch wall. Both drivers were uninjured. Major crashes continued on lap 16 when Tyler Reif climbed over the top of Iest’s driver’s side door on a restart, with both cars eliminated from contention.

Zampa kept applying pressure to Love with the pair running closely across the line at the lap 40 break while Las Vegas’ Tanner Reif up to third at that point as well.

Kabe McClenny tried a few times to get around Reif for third before Reif solidly joined the battling up front in the closing stages. Reif applied a bump and run to take second from Zampa on lap 49 and a caution on lap 54 set up the battling to the checkered flag. Reif made contact with Love, allowing Zampa to go from third to first in one corner. Reif and Love traded contact again before Reif muscled back into second.

On the final lap, Reif made contact with Zampa down the backstretch and stayed engaged on his bumper as he pushed him into turn three. He attempted to slide up in front of Zampa in turn four and the pair made contact, sending Reif spinning. Zampa and Reif crossed the stripe nearly equal – Reif backwards and Zampa forwards. The MAVTV cameras caught Zampa ahead as did the transponders in one of the wildest finishes in series history. Love watched it all unfold from third with McClenny fourth and Jay Juleson fifth in his debut.

The Mini Cups vs. Bandoleros had a tension-filled evening as well, with their 20 lap event fraught with spins and crashes. The most notable incident came when Bandolero points leader Riley Massey and her teammate Ethan Nascimento tagged each other on the front stretch sending Massey hard into the wall. Bakersfield’s Hank Hall, age 10, went on to win the overall and the Bando portion of the event while Mini Cup points leader Kale McClenny was victorious yet again among those cars.

Jillaun Holden won the 2018 Toyota Sedan championship to add to her 2016 crown, finishing second in Saturday’s race behind Jason Lawton. A spin on lap 22 brought the field together but Lawton motored away over the final three laps. Kyle Labrie overcame the spin to finish third.

Modified Super Toyotas were led by the Reynolds 1-2 punch, with Ryan leading 21 laps for the win while Shaun worked his way past both 2017 champion Bert Stephens and John McCullum Jr. to take second. Patrick Geiger ended up working past them to finish third as well.

Madera Racing on MAVTV airs Thursdays every week. The show airs at 5 p.m. and 8 p.m. PST and is also available on the Lucas Oil Racing TV app. The fifth round of the RPM Mortgage Pro Late Models airs September 27th.

Posted in Madera Speedway
← DAVEY HAMILTON, JR. RETURNS TO IDAHO WITH KING OF THE WING AT MERIDIANPODIUM FINISH AT HAGOPIAN MEMORIAL FOR PAHULE →