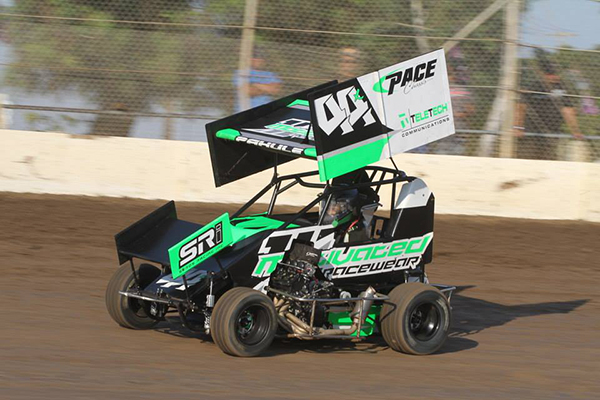 BRENTWOOD, CALIFORNIA (SEPTEMBER 24, 2018) – Jeffrey Pahule, Jr. had one of his best runs of his career, scoring a strong third place performance the prestigious Mark Hagopian Memorial on Saturday night. The event at the Keller Auto Raceway at Plaza Park is one of the most coveted in all of Micro Sprint racing.

Pahule’s primary sponsor Teletech Communications also supported the Restricted portion of the event that he raced in. Friday’s preliminary action did not have any bearing on the Saturday features and Pahule came in on Saturday ready to race.

He came right out of the gate third in hot laps before timing in ninth quick out of the 23 car field He proceeded to steer his #44x Pace Chassis to the heat race win in heat race #3, leading all eight laps comfortably.

Pahule started the 25 lap feature from ninth but quickly found himself knocking on the door for a top-five. He took over fifth on lap 17 then continued his charge forward. He went back and forth for third before taking the position for good on lap 22. He closed within one second of the top two and ran lap times a tenth to two tenths of a second quicker, but ran out of time to go for the win.

The huge third place finish gives Pahule momentum entering into the special event portion of the later part of the season. The points racing season ends on October 5th and 6th with the King of California, Delta Speedway, and Dixon Speedway seasons all concluding that weekend. Pahule also has eyes firmly on the $1500 to win Restricted portion of Turkey Bowl XVIII, October 26-27 at Delta Speedway.