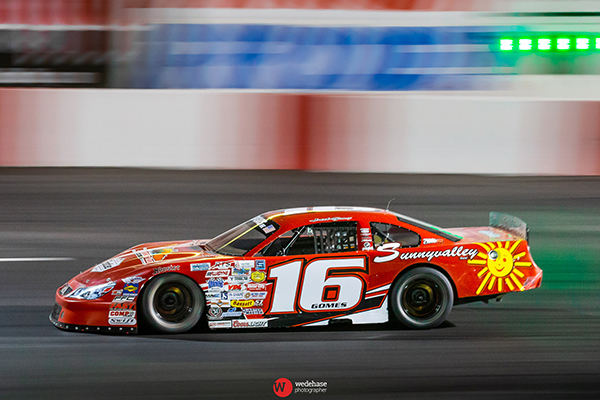 The win was not assured early on when he started third and fell as low as sixth during the torrid early battling. Misfortunes for two of the early leaders aided in Gomes’ winning cause.

2006 champion Eric Schmidt of Roseville, CA drew the pole position and led lap one while Blaine Rocha drove from eighth to fifth early on. Ricky Schlick started tenth and had a nice early battle with Bob Lyon for seventh as well.

The first caution flew on lap 17 when rookie Kyle Neveau spun in turn four and he retired to the pits shortly after. On the restart, Schmidt and Carlos Vieira battled with Vieira using the outside line to take the lead on lap 22. Gomes fought with leading Rookie of the Year contender Cole Moore for third on lap 26, while behind them Craig Raudman battled with points leader Jeremy Doss.

Doss, Moore, and Raudman reshuffled several times before Raudman knifed up the inside to advance to third on lap 42. Raudman then nabbed second on lap 45 from Schmidt.

Raudman continued to charge forward from the bottom, getting underneath race leader Carlos Vieira. The duo collided in turn three, sending Vieira for a spin and bringing out a caution on lap 49. Both drivers suffered damage and had to take trips to the infield pits for repairs before returning at the rear of the pack.

Vieira’s hard luck yielded the lead back to Schmidt, who chose the outside line against Doss on the ensuing restart. The decision paid off, with the top-three of Schmidt, Doss, and Gomes all electing to run up high. As the top-five tightened up under a blanket, Doss decided to make his move, diving inside Schmidt on lap 62 in turn three. Schmidt and Doss came together, sending Schmidt spinning with Bob Lyon narrowly avoiding the incident. Yet again, the top-two were relegated to restart at the rear of the field.

These melees thrust Schlick into a lead that he held until a spin by Bob Lyon on lap 67 brought out another caution. The lap 70 restart was Schlick’s undoing as he dropped back steadily, bottling up the field in several three-wide packs. Gomes emerged with the lap 71 lead while Raudman was thrust up into third quickly. Schlick ended up drifting back to 16th before dropping out seven laps shy of the finish.

Gomes was not comfortably ahead by any means, as lapped traffic brought the top-three together briefly by lap 100. Rocha chased Gomes as they darted in and out of traffic. Raudman successfully fended off Doss, who was fighting fading brakes, to maintain third. The caution never flew again and Gomes claimed a popular .814 second victory over Rocha, Raudman, Doss, and Schmidt. The series has two rounds remaining with Doss and Schmidt engaged in a tight points battle.

The Legends of the Pacific concluded their touring series championship with action at Madera on Saturday night, with 15 cars competing in a 35 lap feature. Bakersfield’s Colton Page started seventh and worked his way up into the lead on lap seven and never relinquished it. He accumulated a six second advantage while Pete Soto had a five car deep train for second.

A late race caution for a spin in turn one erased Page’s lead but he managed to drive away again for a 1.757 second victory over Soto. Chad Nascimento fended off second in points Cody Winchel to take the third position and the championship in the series. Matt Winfrey closed out his Young Lions championship run with a fifth place effort. The race was halted by a lap one incident when Brendan Ruzbarsky hit the front stretch wall. He was uninjured.

Super Hobby Stocks were dominated in qualifying by 72 year-old Richard Herzog, but the racing action told a different story. 2018 champion Steve Schermerhorn won the heat race and then raced side-by-side with Herzog for the duration of the 25 lap feature. Their battle for third was the highlight of a main event dominated by Howard Holden as he took a 2.669 second win over Jesus Hernandez. Schermerhorn won the duel with Herzog for third. The series has one race remaining on October 20th.

Toni Breidinger added to her all-time record as the winningest female in USAC competition, using her Honda powered entry to win the 30 lap Western US Midget main event. While the 19 year-old from Hillsborough set a furious pace, the action behind her for second was entertaining. 15 year-old Joey Iest and 17 year-old Adam Lemke, the points leader, raced hard all the way to the finish. Iest outfoxed the veteran Lemke for a well-deserved second place finish.

Legends of Kearney Bowl and Hardtop Sportsman also competed in exhibition races to round out the busy evening at the one-third mile.

Madera Speedway is gearing up for one its largest races in track history with Saturday’s Nut Up Industries Short Track Shootout. The 6th annual event for the RPM Mortgage Pro Late Model Series is a 150 green flag lap contest with $10,000 on the line for the winner. A field of over 50 is expected to battle in this MAVTV-televised event.

The 51FIFTY Energy Drink Jr. Late Model Series and Mini Cups vs. Bandoleros will also stage their championship finales. The popular touring Lucas Oil Modifieds round out the buffet of all-televised short track excitement. Activities begin Friday with practice sessions before the lower mains are slated to start at 3 p.m. on Saturday afternoon. Saturday’s features begin at 5 p.m.