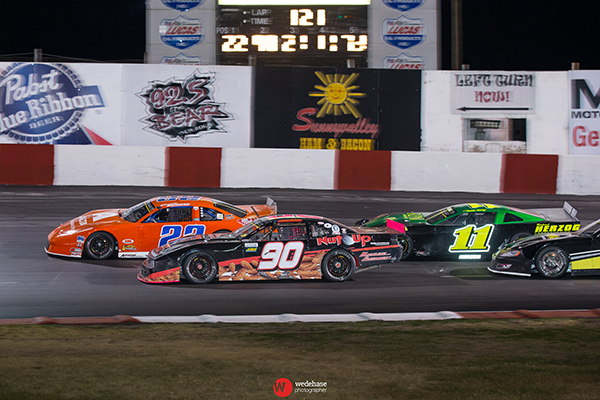 MADERA, CALIFORNIA (October 2, 2018) – The 6th annual Nut Up Industries Short Track Shootout at Madera Speedway has attracted some of the top short track talent in the western United States aiming for a $10,000 prize. The 150 lap RPM Mortgage Pro Late Model Series feature headlines a night of completely MAVTV-televised action and will also be the championship deciding race for the nine race series. Championship races for the 51FIFTY Jr. Late Models and Mini Cups vs. Bandoleros are also scheduled, along with a 75 lap contest for the Lucas Oil Modified Series.

More than 50 Late Model are expected with $1,000 also being offered for the winner of the 25 lap B Main.

Only three different drivers have visited victory lane in the illustrious history of the shootout. Mike David won the inaugural running before Eric Holmes went on a streak of three-consecutive wins to earn the nickname “Mr. October”. 2015 & 2017 series champion Buddy Shepherd broke their stranglehold when he grabbed the 2017 edition. All three drivers are back to defend their places among the greatest drivers in the 47 year history of the one-third mile oval.

The subplot of a great championship battle adds to the intrigue, with Madera’s all-time winningest stock car driver Matt Erickson trying to win his second series title while battling with 16 year-old Austin Herzog. Both drivers are hungry for a piece of the $10,000 pie and the championship as well.

Among the drivers aiming for just the shootout win, arguably none are more accomplished than Trevor Huddleston and Jeremy Doss. Huddleston won the 2017 NASCAR California state championship and missed out on the national title by a scant three points. After winning 22 Late Model features last year, Huddleston has added 14 Late Model victories this year while also battling for the K&N West Rookie of the Year at the same time. One track he still needs a victory at is Madera, however.

Doss has four stock car wins at Madera including two with the Pacific Challenge Series, one with the SPEARS SRL Southwest Tour, and a win last year in the RPM Mortgage Pro Late Model Series. The current SRL points leader and former Montana 200 winner would like to add his to extensive resume with a victory on Saturday night.

Linny White won last October’s Lucas Oil Modified race at Madera and is always a threat at the speedway. Jagger Jones – grandson of the legendary Parnelli Jones, has won seven times in 2018 in a Late Model and is part of a strong multi-car effort teamed with Huddleston, off-road standout Cole Potts, female driver Lexi Gay, and Dean Thompson. Long time Madera regulars Dillon Tucker, Ryan Hart, Jason Aguirre, and Garland Tyler are all still looking for their first televised victories, while Logan Zampa, Racin Vernon, and Blaine Rocha would like to return to victory lane during the richest race of the year.

The 70 lap feature for the 51FIFTY Energy Drink Jr. Late Model Series might be the mostly hotly contested of the evening. The drivers ages 10-16 years old find themselves in a championship fight for the ages with 2017 champion Jesse Love tied with three-time 2018 winner Dylan Zampa. Las Vegas’ Tanner Reif is just eight points behind in third. Reif and Zampa ended the last event spinning across the finish line as a possible harbinger of things to come. Tanner Reif and Kabe McClenny round out the top-five in the points.

Mini Cups vs. Bandoleros has had an exciting inaugural season with 20 lap combined events that see each division running for separate points and trophies. Both division championships are all but final, with Bakersfield’s Kabe McClenny leading by 49 points over Joseph Holliday in the Mini Cups. The Bandolero side is also a Bakersfield led affair with Riley Massey a likely insurmountable 30 points ahead of Zachary Ginn.

75 laps are on tap for the Lucas Oil Modified Series this weekend with Taylor Miinch opening the year with four consecutive wins to lead the series points. One of those wins came in June at Madera, when former Madera champion Scott Winters and Idaho’s Shelby Stroebel crashed in turn four sending both of their #24 cars into the wall.

Fast-time qualifier Kyle Tellstrom, an Idaho resident who is popular with the Madera fans, was involved in two separate incidents himself in a heart breaking evening. Tellstrom will be returning on Saturday night to challenge more than 20 series regulars in the ninth race of their 2018 touring season. Fresno’s Tyler Herzog is among the drivers who will race in both the RPM Late Models and the Lucas Oil Modifieds.

The biggest weekend of the year at Madera Speedway begins Thursday night with the Nut Up Industries Pre-Race Party at the Madera Savemart store from 5 p.m. to 7 p.m.. Madera Speedway drivers and Nut Up drivers will be in attendance with their race cars and the first 50 attendees receive a free ticket to the race.

Practices at the track begin Friday with gates opening at 11 a.m. and the track open from 3 p.m. to 9 p.m.

Pit gates open at 8 a.m. on Saturday with final practices at 10:30 a.m. Qualifying is at 12:45 p.m. with C and B Main racing starting early at 3 p.m. The Mini Cups vs. Bandoleros will close out the preliminary races before opening ceremonies at 5 p.m. Jr. Late Models, Lucas Oil Modifieds, and the 150 lap Nut Up Industries Short Track Shootout will follow.