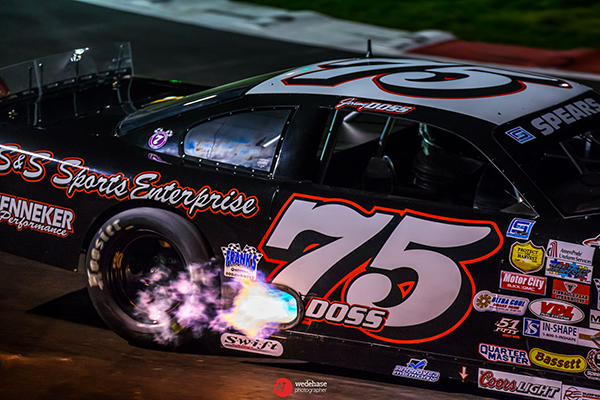 Jeremy Doss, the 2013 & 2014 SRL championship runner-up, is aiming for his first series crown and leads the championship into Madera. Doss used a last lap pass to win the season opener at Madera, and added another victory in May at Las Vegas. Doss has podiums in five out of six starts this year and his Madera resume includes two Pacific Challenge Series wins as well.

Eric Schmidt ranks second in the standings and last won at Madera in 2006. He went on to win the championship that season, meaning a win on Saturday could be a harbinger of things to come. Ricky Schlick, Livingston’s Carlos Vieira, and St. Mary’s High School graduate Jeff Bischofberger round out the top-five in the points. All three are still in search of a win in 2018.

Adam Lemke, the current Rookie of the Year points leader in the RPM Mortgage Pro Late Model Series at Madera, will make his debut in the series. All told, more than 20 cars are expected to compete in the 125 lap feature presented by 51FIFTY Energy Drink.

Lemke will also be busy with the USAC Western US Midgets, where he leads the points after a dominating season during their eight visits to the speedway. The resurgent 360 Super Modifieds are fresh off of the Donnie Large Memorial during the Harvest Classic, where Eric Humphries of Chowchilla darted to victory. Steve Schermerhorn has already clinched the Madera Hobby Stock championship with still two rounds to go in the competitive division.

The traveling Legends of the Pacific routinely average 15-20 entrants per visit at Madera with Saturday marking their sixth and final run of the season.

Action gets started on Friday evening with pit gates opening at 2:30 p.m. and practices from 4:30 p.m. – 8:30 p.m. Saturday’s pit gates swing open at 11:30 a.m., followed by practices at 1:30 p.m. Time trials and heat races for the local divisions will follow, along with the 360 Super Modified main event and SRL Southwest Tour qualifying, before opening ceremonies officially take place at 7 p.m. The SRL Southwest Tour 125 presented by 51FIFTY Energy Drink is slated to go green at approx. 9 p.m.