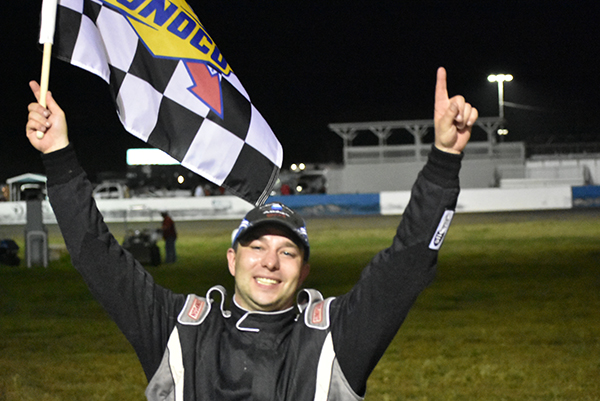 ANDERSON, CALIFORNIA (April 21, 2018) – Jason Romero won his sixth career Pacific Challenge Series presented by PenneyLawyers.com feature, and first outside of All American Speedway, by taking Saturday’s 75 lap feature at Shasta Speedway.  Romero opened up the night of Super Late Model racing on the 3/8ths mile by setting a new track record before the decisive victory.

Romero’s lap of 15.428 in Sunoco Fuels qualifying lowered the mark previously set by two-time series champion Jeremy Doss of Upperlake, CA.  Romero’s fast time placed him three tenths ahead of the rest of the 14 car pack.

The gap narrowed when the drivers competed in the American Racer Tire Dash.  The eight lap contest’s lineup is set by a redraw, which allowed 2015 champion & 2017 series runner-up John Moore to steer his Camaro to victory ahead of 2006 Westcar Late Model Series champion Shannon Mansch.

Moore’s dash win gave him the pole for the main event, and he took the lead from Mansch at the start.  He brought third-starting Romero with him.  Several laps later, both Matt Scott and Cole Moore dove inside Mansch as well shuffling her back to fifth.

The top-four broke into two pairs of battles until Scott and Cole Moore came together in turn one with Scott spinning his #35 car.  John Dalerio and Matt Wendt were among those who had to scramble to avoid the spin.  Both Scott and Moore had to pit for repairs.

Romero passed John Moore on the outside to take the lead on the restart.  The caution flew on lap 11 when debutant Jarrett Gilmer slowed with mechanical problems.  Romero picked the inside for the restart which allowed John Moore to lead the 12th lap by a nose.  Romero took the lead back the following lap.

Willows’ Dane Nissen spun in turn four for the next caution on lap 21 with Scott heading to the pits briefly for more repairs during that caution.  Nissen also pitted and retired from the race.  Romero and John Moore both spun into turn one when the race restarted, with Tracy Bolin among those who suffered damage in the incident.  Mansch assumed the top spot with Romero and Moore restarting at the back of the field.

Cole Moore used the incident and the restart to advance up to second position around the outside of John Dalerio.  Three laps later, Moore dove inside Mansch into turn one to take the lead.  Bolin pitted again under the green flag run as his damage worsened and he failed to return to the race.

Cole Moore’s hopes for victory were dashed when he stopped in the infield on the backstretch for a lap 38 caution.  Moore was able to re-fire and drive into the pits but it handed the lead back to Mansch once more.  Cole Moore did not return to the race.  Ukiah’s John Dalerio spun in turn four on the next restart but managed to continue.  Dave Byrd spun into the infield, however, to force a caution.

Romero knifed his way through the incidents into second place.  He took the lead from Mansch coming back to green and never looked back.  Romero built up a sizeable lead until Dalerio spun again in turn four.  John Moore pitted under the caution to surrender a top-five run.

Romero was undeterred, driving to a five second win while Mansch fended off champions Mike Beeler and John Moore for a well-deserved second place finish.  Matt Scott came back for a fifth place finish while Anderson’s Ryan Peeples drove from 14th to sixth to win the Penney Racing Supply Hard Charger.

The Pacific Challenge Series presented by PenneyLawyers.com resumes on May 19th at Ukiah Speedway for the *North State Challenge*.