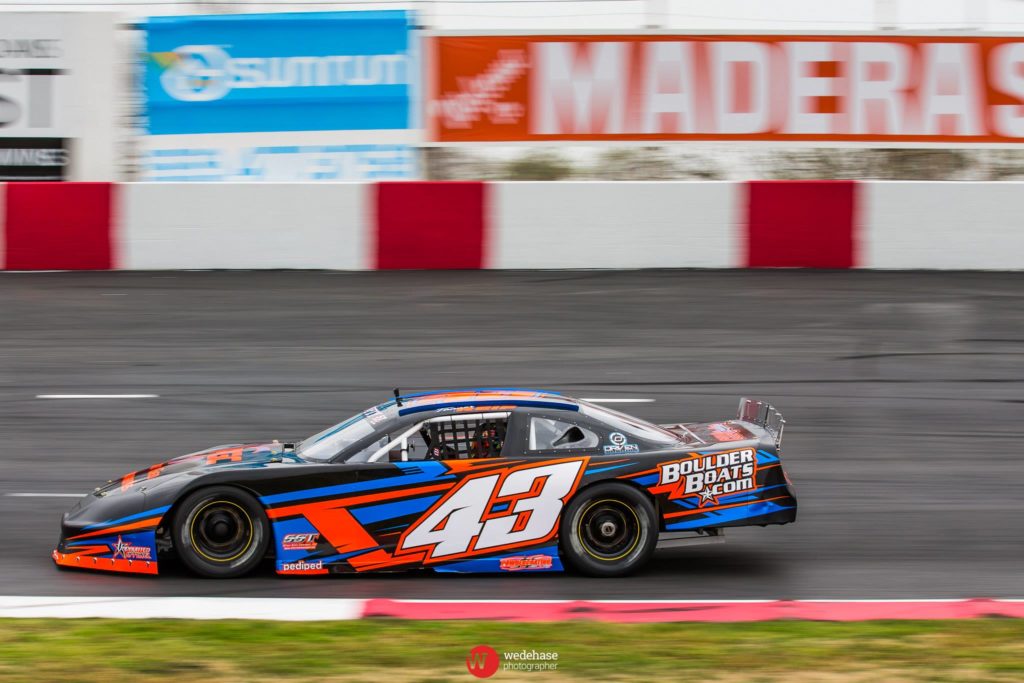 The Mini Cup vs. Bandolero series, Toyota Sedans, and Hobby Stocks make up the rest of the night’s racing entertainment.

Matt Erickson has already scored over $7,000 in prize money across the first two RPM Mortgage Pro Late Model Series races of the year with a sweep of both races.  The dominant start to the year has yielded a 25 point lead over 2017 Rookie of the Year Austin Herzog.  Herzog, the six-time Jr. Late Model winner, gave Erickson his best challenge yet in round #2.  The race was marked by exciting back-and-forth battling before Herzog spun with six laps remaining to end his chances for a win.  Multi-time track champion Rick Thompson picked up on a third place finish on April 8th to move to third in the points.  Thompson is just one point ahead of Garland Tyler and Glen Cook who are tied for fourth.

A new sheriff is in town in the 51FIFTY Energy Drink Jr. Late Model Series as “Rolling the Dice” Tanner Reif of Las Vegas leads the championship.  The third season for the series for drivers ages 10-16 years old has been perhaps the most competitive yet.  Defending champion Jesse Love scored his sixth career series win on April 8th and matches that with a third place finish opening night to run second in the standings.  Bakersfield’s Kabe McClenny has second and fourth place finishes for third in the championship.  Opening night winner Dylan Zampa of Napa is fourth with Mentone’s Austin Edwards rounding out the top-five.

Mini Cup vs. Bandolero was originally billed as a north versus south, with most of the Mini Cup racers coming from the northern part of the family while the Bandoleros compete primarily in Bakersfield, Irwindale, and Las Vegas. But Bakersfield drivers Kale McClenny and Kercie Jung have each swept their respective divisions.  Jung, 12, is the 2017 Kern County Raceway Park Bando champion while McClenny is in his second season of Mini Cups.  Both aim to move into the Jr. Late Model division soon.  The 20 lap races are televised for coverage on MAVTV during the Jr. Late Model broadcasts.

Toyota Sedans have been the busiest division at Madera as Saturday’s event is their fourth of the year.  2016 champion Jillaun Holden has two wins to lead the championship while Jason Lawton won the last main event.  Thomas Magray is second in the championship followed by 2017 champion Mike Marley.  16 different drivers have started a race so far across the Sedans and F4s that run together.

Hobby Stocks put on a fine season opener that saw Howard Holden take a come-from-behind win over Chuck Dozhier.  The battling will continue in a 30 lap race this weekend.

This weekend’s activities begin with an open practice on Friday night from 5 p.m. – 8 p.m.  On Saturday, pit gates open at 10:30 a.m. with practices beginning at noon.  Qualifying follows at 2 p.m. with the first heat races and main events beginning at 4:15 p.m.  Opening ceremonies are slated for 5:30 p.m.