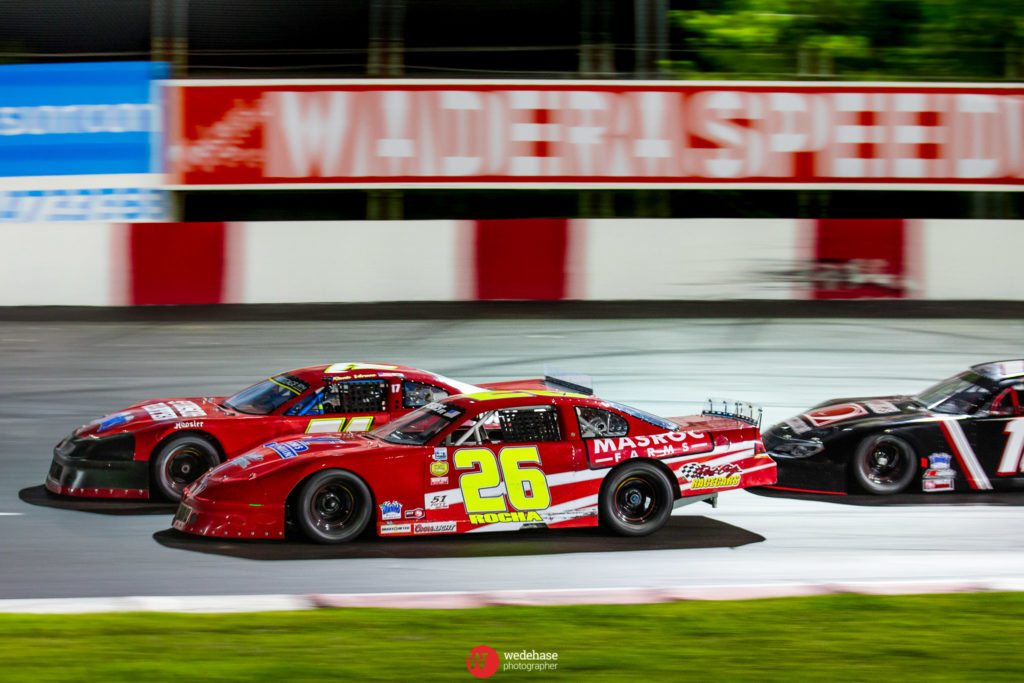 MADERA, CALIFORNIA (April 28, 2018) – A full moon and tight track conditions led to a wild night at Madera Speedway for round #3 of the MAVTV-televised Late Model racing.  Blaine Rocha claimed his first career RPM Mortgage Pro Late Model 80 lap feature.  Rocha led the final 12 circuits for the win while Dylan Zampa won his second 51FIFTY Energy Drink Jr. Late Model race on Saturday as well.Bakersfield’s Racin Vernon was perfect all weekend, leading both practice sessions and taking the fast-time in qualifying.  Vernon continued the good luck when he drew the pole position in the redraw as well.  Vernon started alongside fellow Bakersfield racer Jacob Smith, with Vernon taking off with the lead.  Smith’s run slowed early as he was spun by Glen Cook into turn one on the second lap, with the spin leading to Logan Zampa suffering significant front end damage.  Austin Herzog and Adam Lemke also had to pit for repairs.

Vernon led the opening three laps before Rocha took over for laps four through six.  A caution on lap seven came out when incoming points leader Matt Erickson spun and both Christian Roche and Zampa grabbed some damage in the melee.  Vernon took over the lead on the restart and proceeded to pick the outside line the rest of the evening on restarts.

Rick Thompson had advanced from 13th to seventh by that point and continued to move forward as the race saw four more incidents before lap 31, when Quintin Harris stopped in turn three with right front damage.  Erickson stalled on the front stretch and was out of the race with an apparent problem on the left rear.

Garland Tyler and Jack Wood began their duel for third on the restart in a battle that would continue on for many laps throughout the feature.  Herzog emerged into the top five before the halfway break as well.

Vernon led Rocha across the line at the lap 40 break while Tyler led Wood by a nose with Herzog fifth.  After a break for adjustments and MAVTV interviews, the second half resumed with Vernon driving away while Herzog took over fourth from Tyler.  Rocha remained on Vernon’s bumper as the top-two ran around the outside of the race track.  Herzog took up the battling with Wood for third position before the punctuation mark of the race on lap 58.  Vernon spun on his own entering turn one to surrender the lead and force the second half’s only caution flag.

Rocha took advantage, assuming the lead and driving away from Wood on the restart.  Herzog never relented and got around Wood for second with six laps remaining.  Rocha drove to victory by five car lengths over Herzog and Wood. Adam Lemke charged back to pass Garland Tyler for fourth as well.

With Erickson failing to finish, Herzog assumes the points lead before the upcoming Military Tribute Night on May 26th.

The drivers ages 10-16 years old in the 51FIFTY Energy Drink Jr. Late Models had a dynamic 70 laps as well.  Jesse Love IV, winner of round #2 and the 2017 champion, looked poised for victory before a grinding crash ended his efforts.

Love qualified fastest and started on the outside pole alongside 2018 points leader Tanner Reif.  The first caution flew on lap five for Olivia Manke spun out in turn four.  The caution flew again on lap 13 when Anthony Guiamano spun in turn two from the fourth position.  Love picked the inside of Reif on each successive restart attempt.  Las Vegas’ Tyler Reif spun in turn one on lap 16 and Manke suffered hard contact with both Kyler Berry and the outside wall to end her evening.

Dylan Zampa aimed inside Tanner Reif for second place before spinning as he tried to go three wide underneath a lapped car.  Kayla Eshleman swooped around Austin Edwards to take third while Jesse Love led Reif into the lap 40 scheduled break.

Racing resumed with 30 laps to go and saw a large crash end the day for several cars.  Reif edged forward on Love coming to green.  Heading into turn one, Love and Eshleman made contact sending Love up the hill into Reif.  Reif spun and the field scrambled.  The resulting incident saw Love have a brief fire as he hit the backstretch wall, with Guimano spun around backwards into the wall as well.  Reif, Love, and Guiamano were all done for the night.

Eshleman was relegated to the rear of the field with third year driver Austin Edwards assuming the lead.  Zampa moved inside Kabe McClenny for second quickly.  Four laps later, Zampa took the lead from Edwards and started to stare down his second win.

Eshleman knifed through the pack to challenge McClenny for third with Tyler Reif in the mix as well.  Reif moved past them both and closed down on Edwards for second.  Reif spun on his own after taking second on lap 66, setting up a four lap run to the finish.  Zampa motored away to victory with Eshleman inheriting second when Edwards faltered with a flat tire.  Kyler Berry completed a great comeback to finish third in his second televised start.  Wastonville’s Lilly Mead managed to get past Kabe McClenny for fourth as well.

Bakersfield’s drivers continued their perfect record in the Mini Cup vs. Bandoleros series, but it was a new young lady taking the helm of the Bando class.  Riley Massey overcame a mid-race penalty to charge to victory.  Massey used her horsepower in the larger Bando car to advance from fifth after the inversion.  She went straight to the lead over a pack of four Mini Cup cars before the field made it to turn one at the start.  Massey held that lead until the first caution when she was penalized for jumping the start.

Kale McClenny won the first two Mini Cup races and assumed the overall lead as well before Massey made her move forward.  Massey drove away to a comfortable Bandolero victory while McClenny was part of a great Mini Cup race with Aaron Thomas.  The duo went side-by-side across the finish line with McClenny taking his third Mini Cup win by just .005 seconds.  Joseph Holliday rounded out the Mini Cup top-three while Zachary Ginn of Bakersfield finished second in the Bando class.

Joshua Whitfield made his triumphant return to the Hobby Stock division by taking the 30 lap feature as he drove away from Thomas Suarez.   Steve Schermerhorn rounded out the top-three.

2016 Toyota Sedans champion Jillaun Holden recovered from an early spin to get her third Toyota Sedan victory of the season and extended her points lead in the process.  A caution with two laps to go for Kyle Labre spinning set up a thrilling finish.  Rookie Greg Tyler made a valiant effort to jump to Holden’s outside coming to the line.  Holden held on by a scant .007 seconds with Tim Curtis debuting a new car for a third place finish.