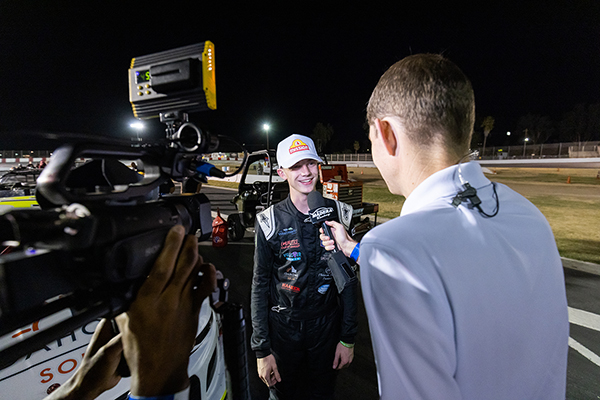 Smith’s ARCA West slate includes the winding road course at Sonoma Raceway, Irwindale Speedway in July, and October stops at the Las Vegas Bullring and Madera Speedway. Las Vegas served as the site of Smith’s debut in the series in 2022. Smith ran within the top-ten throughout the event, ultimately finishing ninth out of an outstanding 26-car field.

“Our goal this year is to win the championship at Madera,” Smith said. “Our mindset is focused on winning races in 2023. We showed in 2022 that we are consistent and competitive, and I am excited to build upon that this year.

Smith scored five top-five finishes over the final six rounds of the Madera Speedway season including a runner-up performance in August. He ended the year with an outstanding third place finish in the $10,000 to win, 150-lap Short Track Shootout in October. The consistent runs netted third in the Pro Late Model championship standings, Rookie of The Year, and Most Popular Driver in the No. 11 VanDoorn Chassis.

“The success we had at the end of last year has us extremely excited for 2023,” Wilson said. “I’m really proud of Jacob’s progress. Our communication is really good. He knows what he wants to feel in the car and, with VanDoorn’s help, we made some changes and went in the right direction.

I think we can race within the top-five every week. We’re always trying to make our stuff better to go out and win some races and win the championship this year.”

Smith will lean on his karting background when he returns to the ARCA Menards Series West at Sonoma Raceway on June 9. Sonoma’s kart track, located in the hills above the road course, hosted Smith’s two IKF Grand National Championship wins. Seven years later, he will take to the 1.99-mile road course in the Wine Country.

For more information on Jacob Smith Racing, follow him on social media. Sponsorship and marketing information is available by contacting jacob@jacobsmithracing.com