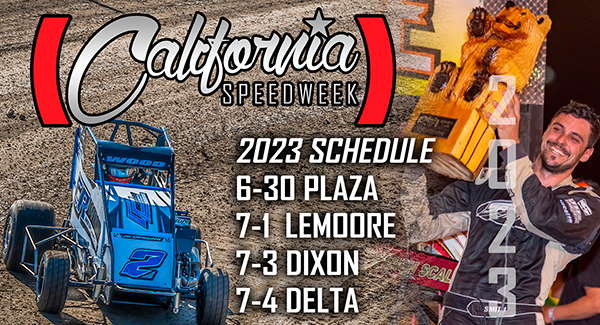 STOCKTON, CALIFORNIA (January 20, 2023) – Officials from the California Speedweek have announced a return of the famed Micro Sprint classic, featuring action from June 30 to July 4 throughout all four of California’s weekly Micro Sprint facilities. The Speedweek will open on Friday night June 30 at Keller Auto Raceway at Plaza Park in Visalia, Calif. The action moves West to Lemoore Raceway on Saturday July 1. An off-day on Sunday July 2 will allow teams time to regroup and travel north to Dixon Speedway on July 3. The series finale will take place on July 4 at Delta Speedway in Stockton, Calif.

Drivers will compete in Super 600, Non-Wing, and Restricted with registration opening soon for all four nights of competition. Previous champions of the series include Fresno’s Gio Scelzi, who announced on Friday that he will compete full-time in the World of Outlaws in 2023. Other former champions include Chili Bowl A-Main starters and Tulsa Shootout driller winners such as Mitchel Moles, Tristan Guardino, Jake Hagopian, Tj Smith, Chris Andrews, Nikko Panella, and Michael Faccinto.

Sponsorship information is available by contacting Steven Blakesley at (916) 316-4854 or steven@norcalmedia.com