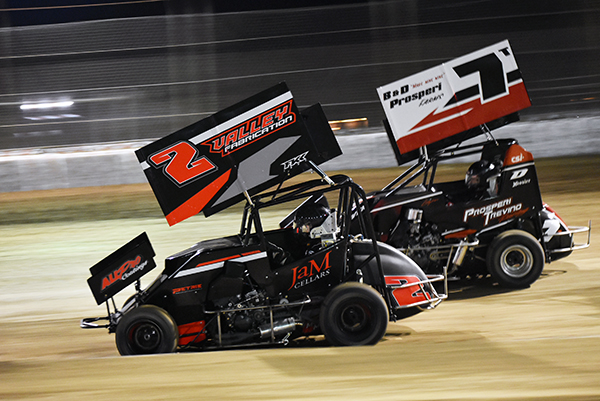 STOCKTON, CALIFORNIA (April 29, 2019) – With an average car count of 105 cars through two points races in 2019, Delta Speedway presented by Financial Center Credit Union will host its highly anticipated third round on Saturday.  Race teams and race fans alike have been treated to great racing action so far across the Super 600, Non Wing, Restricted, and Jr. Sprints action at the dirt bullring located at the San Joaquin County Fairgrounds.

The top-two in the 2018 Super 600 championship have split $500 victories so far this year with Raio Salmon winning the opener before Nikko Panella grabbed night #2.  Raio finished fourth in the second event, earning a four-point lead over Stockton’s Caden Sarale.  Sarale has finishes of fourth and third while the champion Panella ranks third in the standings, 28 points behind.  Keith Day, Jr. and Brad Hannum round out the top-five.  The Super 600 division races for 30 laps and $500 to win this weekend!

Non-Wing is off to another huge start with large car counts gracing the speedway.  A total of 59 drivers have competed when including the non-points WoO weekend special as well.  2010 and 2011 champion Dan Mognaga has stood above them all with a win on April 6th to lead the $1000 to win championship.  His lead over 2018 champion Tj Smith stands at ten points.  Smith had a sterling season last year but thus far has been locked out of Delta victory lane with three podium finishes.  2016 Non Wing champion Brandon Carey ranks third over 2018 runner-up Sarale and young Robbie Lewis.  Non-Wing also competes for $500 in each points race for 30 laps.

Restricted has seen a large influx of new young talents with Madera’s Logan Trevino emerging at the top of the mountain with two wins this season.  Devon Courtnier has a fourth and a third to propel him to second in the standings while Jeffrey Pahule’s second place finish in the opening night is enough to place him third overall.  Sophomore driver Blaine Baxter and rookie Reilee Phillips round out the top-five.  25 laps and a guaranteed minimum $300 to win are up for grabs for these drivers.

Jr. Sprints has seen all three features won by drivers in cars carrying the #55.  Jett Barnes won the WoO weekend special before Lucas Mauldin grabbed the opening points night.  Barnes returned to victory lane in round two.  Mauldin leads the standings ahead of Colton Key, Kyle Fernandez, TK O’Brien, and Peyton Whitehouse.  Jr. Sprints will compete for 20 laps on Saturday with a guaranteed minimum $200 to win.

Pit gates open at 1 p.m. with the drivers meeting set for 4:30 p.m.  Hot laps begin shortly after with qualifying and racing to follow.

Pit passes are just $20 with no membership required. Grandstand tickets are $10 for adults, $5 for kids 6-12, seniors 55+ and military, with kids 5 and under free!  Tickets and pit passes can be purchased in advance at deltaspeedway.myracepass.com