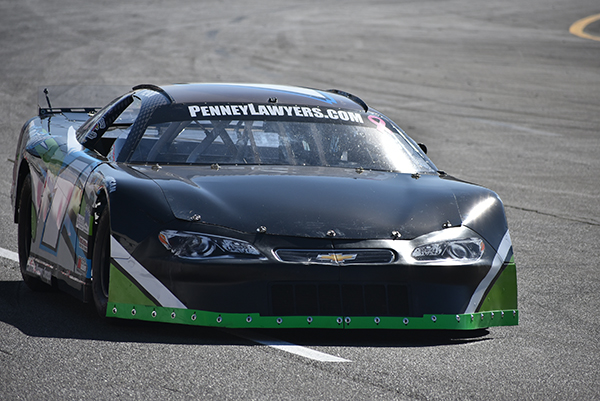 SACRAMENTO, CALIFORNIA (March 28, 2018) – The Pacific Challenge Series presented by PenneyLawyers.com will begin its 2018 Super Late Model campaign on Saturday at Madera Speedway, after rainy spring delayed proceedings by two weeks.  The PCS is now paired with an exciting evening of racing that honors valley racing legends Smokey Hanoian, Al Pombo, and Marshall Sargent.  Allied Storage and Hampton Inn & Suites will present the activities that include the Big Egg Hunt and an undercard including BCRA Midgets and USAC Western US Midgets.

A wide-variety of talented drivers is expected to compete in the 75 lap feature on the one-third mile oval.  Carlos Vieira leads those drivers after he dominated both PCS races at Madera in 2017.  Vieira grabbed victory in the March race but recorded a DNF after contact late in the August event while leading.

The 2017 championship had six first-time series winners and the points went down to the wire with Mike Beeler becoming only the second repeat champion in series history.  John Moore narrowly missed out on the crown with his son Cole third in the points.  The hottest driver in the series was Matt Wendt who won two of the last three races of the year to be the series’ only repeat winner.  Wendt ended up fourth in the final standings ahead of 2017 Rookie of the Year Jack Wood.

El Dorado Hills’ Jason Romero ended up seventh in the points buoyed by a runner-up in the March Madera race and a win at Roseville in September.  Tracy Bolin’s fifth place finish at Madera to open 2017 was his best finish of the year en route to eighth overall.

Elk Grove’s Mike Hite, and Pine Grove’s Matt Scott made up the rest of the championship top-ten.  Other winners included Derek Copeland at Shasta, Jeff Bischofberger at Stockton, and Randy Hedrick at Ukiah.

Grandstand ticket prices on Saturday have been reduced thanks to Madera Speedway’s fine family of sponsors.  Adults will be just $15, seniors and military $13, youth ages 6-12 $7, and kids 5 and under are FREE!

The weekend’s activities will get underway with a Friday practice session, scheduled from 5pm to 8pm.  Saturday’s race day schedule will see pit gates opening at 10 am with practices from 11:30am to 12:50pm Qualifying will follow.  The American Racer Tire Dash be integrated into the vintage main events that begin at 4pm.  Opening ceremonies commence at 5:30pm with the PCS set to be the night cap with a tentative green flag at 7:30pm