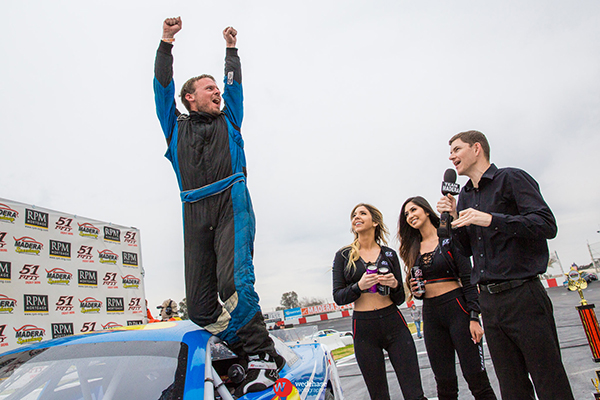 A noontime matinee show on the fastest one-third mile in the West opened with a B Main where Jason Romero of El Dorado Hills led the transferring cars while Erik Woods won the 25 lapper for a $500 cash prize.

With the field narrowed down to 26 starters, it was 2015 and 2017 champion Buddy Shepherd of Bakersfield earning fast-time and proceeding to win the redraw for the pole position.  Shepherd started alongside Jarrett Gilmer, with Gilmer one of five Jr. Late Model graduates in the field.

Shepherd led early before facing a new foe in Lucas Oil Modified standout Linny White.  White and Shepherd put on a side-by-side battling clinic that ran from laps 30 to lap 36 with the duo trading the lead on nearly every circuit.  Shepherd had the lead by a nose when the caution flew on lap 36 for a severe crash on the backstretch involving Hollister’s Adam Lemke.  The Jr. LM graduate tagged the backstretch wall head-on with Gilmer and Sheldon Cooper also suffering damage in the melee.

When racing resumed Shepherd maintained the lead with White following closely over a series of restarts.  2017 runner-up Logan Zampa of Napa was in and out of the pits multiple times during the stint before finally retiring from the race with mechanical woes.

A lap 51 attempt at a restart saw an accordion effect at the back of the field that ended Cooper and Racin Vernon’s evenings.  The activity at the front of the field increased considerably from there onward, with seventh starting Erickson taking the lead.  Erickson’s move to the front came in dramatic fashion when Shepherd slid up the hill in turn three and eventually fell back to fifth position.

Erickson looked poised for the checkered flag while numerous battles continued in two-by-two fashion for second.  A caution on lap 73 for rookie Christian Roche tagging the backstretch wall brought the field together for a critical restart. Erickson and Shepherd each took turns with the lead before Erickson took over on lap 76.

A final caution on lap 77 for PCS Rookie of the Year Jack Wood spinning set up a three lap race to the finish.  Erickson timed the restart well and managed to edge ahead of Shepherd and drive away for an exciting .155 second victory.  Carlos Vieira stormed from 12th to finish third in his series debut with White and 2017 Rookie of the Year Austin Herzog rounding out the top-five.

The 51FIFTY Energy Drink Jr. Late Models opened their third season of competition for drivers ages 10-16 years old and added a new face in the winner’s circle.  Napa’s Dylan Zampa went to the front when it counted on lap 51 of the shortened 60 lap affair to take the crowd-pleasing victory.

Defending champion Jesse Love of Menlo Park qualified third but got an assist when he drew the pole for the main event.  Fast time qualifier Tanner Reif of Las Vegas and Bakersfield’s Kabe McClenny battled for second position before a caution on lap 14 for a multi-car crash in turn one slowed the action.  Anthony Guiamano and Calvin Hegje were both out of the race as a result.

McClenny restarted second while Reif restarted third and eventually fell to fourth when passed on the outside by 2017 third in points Austin Edwards in a later restart.  Zampa started fifth and ran as low as seventh before chipping away at the pack.  Zampa took away second from McClenny on lap 49 and two laps later did the same Love in a stirring set of passes.  McClenny ended up passing Love a few laps later for second as well.  Zampa started his 2018 season with a bang with the win with McClenny, Love, Reif, and Edwards the top-five.  Third year drivers Lilly Mead and Jesse Burks staged a race long duel for sixth as well with Mead taking the position at the checkered flag.

A strong 11 car turnout highlighted the 30 lap main event for the Toyota Sedans, with a ten car inversion placing fast-time qualifier Dean Gould deep in the pack.  Derek Suggan led the first half of the race before Jillaun Holden and Gould entered the mix.  A late caution placed Holden and Gould side-by-side, and Gould took off for a scant two car length win over Holden.  2017 champion Mike Marley snookered Suggan for third as well.

The inaugural Mini Cups vs. Bandoleros race was dominated by Bakersfield drivers with young lady phenom Kercie Jung charging to a half lap victory in her Bandolero.  The former Kern County Raceway Park champion had no trouble topping fellow Bando drivers Seth Wise and Riley Massey for the win.  The Mini Cup half of the field had much more drama, with Avery Vivian and Bakersfield’s Kale McClenny racing in close quarters throughout the clean and green 20 lapper.  McClenny made the winning move around the outside on the final lap of the race to get the Mini Cup win.