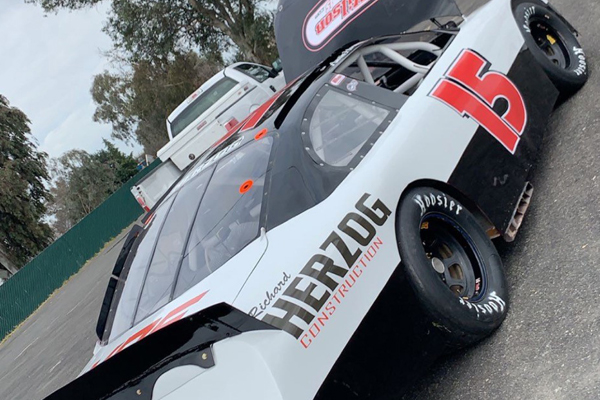 CLOVIS, CALIFORNIA (May 2, 2019) – Austin Herzog, the 16 year-old points leader of the Nut Up Pro Late Model Series at Madera Speedway, will join the brand-new California Challenge Cup Series on Saturday night on MAVTV. Herzog will drive a #15 car for Wilson Motorsports and Crew Chief Charlie Wilson in the 100 lap debut of the series.

Herzog is in the midst of his career-best start to a season with a fast-time, a win, and finishes of third and seventh in the televised Pro Late Model series. Herzog also added a top-ten qualifying run in February’s Winter Showdown in Bakersfield and a non-televised Madera Late Model win this season. The driver out of Clovis landed in the runner-up spot in the Pro series points last year and previously is a six-time winner in the Madera Speedway 51FIFTY Jr. Late Model Series.

Drivers and teams from across the western United States will be battling in steel and composite bodied stock cars in the Challenge Cup series.

Saturday will mark Herzog’s third start in this style of equipment. His career has included an eighth place effort with the NASCAR K&N Pro Series, West at Kern County Raceway Park and a third place finish with the West Coast Sportsman Series at Madera. The West Coast Sportsman served as the precursor for the series that launches on Saturday.

Races are also scheduled on July 13th, August 10th, and September 14th. The championship finale on October 5th will share the card with the Nut Up Short Track Shootout for $10,000 to win for the Pro Late Models. All five races will be covered by MAVTV. Herzog will carry support from Richard Herzog Construction in the opener but is looking for additional support to run for the title.

Herzog’s string of success over the last year has been thanks in large part to working with crew chief Charlie Wilson. When an opportunity arose to drive for Wilson in this new division, Herzog jumped at the opportunity.

“Working with Charlie Wilson has really helped my entire racing program and improved my results,” Herzog said. “Testing has gone well and I feel optimistic that we can leave with a victory this weekend.”

Action gets underway Friday with open practice before Saturday’s practice, qualifying, and 100 green flag lap feature. All activities on Saturday will be staged on just one set of Hoosier Tires.

Potential sponsors are encouraged to contact info@austinherzog.com for more information.