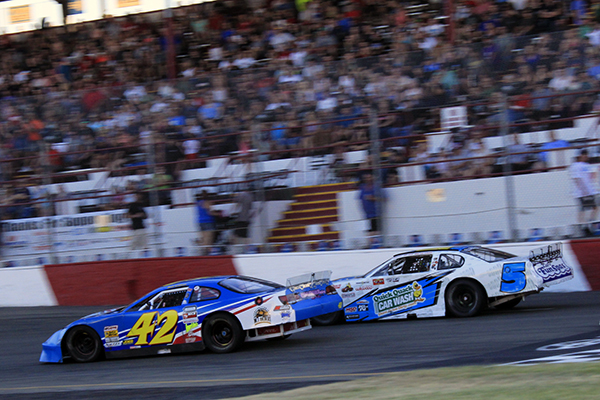 ROSEVILLE, Calif. (April 10, 2019) – The highly anticipated 2019 season for the NASCAR-sanctioned All American Speedway in Roseville, Calif. begins Saturday night. Race fans will be treated to eight main events including the “JM Environmental 127 presented by 51FIFTY LTM” for the touring SPEARS SRL Southwest Tour.

25 entries have been filed for the $5,000 to win SRL race, including local drivers such as Rocklin’s Justin Marks and Elk Grove’s Dylan Lupton who each have extensive experience at the highest levels of NASCAR. Former track champion Eric Schmidt of Roseville will look for his first touring stock car win at the track. Others trying to defend their track from the touring drivers will be father-and-son duo of John and Cole Moore of Granite Bay and Del Oro High School senior Jack Wood of Loomis.

“My dad used to race at Roseville and I spent a lot nights at the track,” Wood said. “I look back at when I was younger how much fun I had at the track just watching. Now being able to come out to the track to race it…I’m super excited about it.”

Twin 35-lap races for the NASCAR Late Models are also on tap, along with NASCAR competition for Limited Modifieds, Super Stocks, and F4s. Drivers will be chasing national, state, and track championships along with season long bonuses and cash prizes. The region’s youngest drivers in Jr. Late Models, Bandoleros, and Mini Cups will also have their opportunity to compete this weekend.

Many of the area’s most popular drivers are expected to be in competition during the first full season of promotion by Bill McAnally Racing Promotions.

“The atmosphere is unreal,” Late Model racer Chris Scribner of Loomis said. “There’s going to be action on the race track and a lot of energy in the stands. Opening night is definitely one you don’t want to miss.”

Weekend activities begin Friday with practice sessions limited to the race teams in competition. On Saturday, pit gates will open at 10 a.m. with practices beginning at noon. Time trials for the NASCAR and local divisions begin at 3:00 p.m. Grandstand gates will swing open at 4 p.m. and will be followed by SPEARS SRL Southwest Tour time trials. Trophy dashes will follow with opening ceremonies and feature events at 6 p.m.