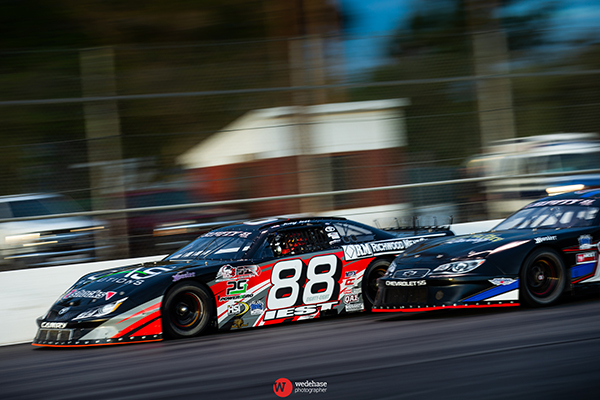 MADERA, CALIFORNIA (April 23, 2019) – The sizzling start to the 2019 MAVTV-televised Nut Up Pro Late Model Series and 51FIFTY Energy Drink Jr. Late Model Series continues on Saturday night from Madera Speedway, with both divisions hosting their third races of the season. Allied Storage and Containers will present a busy night of racing.

The Pro and Jr. combined season average has attracted 50 Late Model stock cars to the one-third mile asphalt oval each night. Mini Cups vs. Bandoleros, Hobby Stocks, and Toyota Sedans will also be competing this weekend.

The Pro Late Model division has been led by a pair of Jr. Late Model graduates to start the year. 15 year-old Dylan Zampa, a three-time winner of the Jr. Series hailing out of Napa, CA, won the season opener and leads the championship. Six-time Jr. winner Austin Herzog, age 16 from Clovis, CA, won the second round of the series for his first Madera Pro Late Model win. Both drivers were busy throughout April. Zampa tested for Lee Faulk Racing Development in a Late Model Stock Car at Hickory Motor Speedway in North Carolina. Herzog added a victory in the non-televised Madera Late Models division last weekend as well.

2018 series champion Matt Erickson finds himself in unfamiliar territory from third in the standings on the heels of a runner-up finish to Herzog in the last event. 2018 Madera Late Model champion Jason Aguirre ranks fourth ahead of sophomore driver Christian Roche. 80 laps of competition are on tap for the Pro LM with $2,000 going to the race winner.

Las Vegas’ Tanner Reif, 13, enjoys a narrow three-point advantage ahead of Madera’s own Joey Iest in the 51FIFTY Jr. Late Model competition. Reif grabbed opening night in March ahead of Iest before Iest outdueled Reif in a thrilling second round of the series. Remarkably, Reif has six consecutive fast-times in the division going back to July of 2018.

Bakersfield’s Seth Wise has led a large rookie class with a pair of third place finishes to rank third in the standings. Jay Juleson and Kabe McClenny round out the championship top-five. 22 different drivers from across the western United States have competed thus far in 2019 for the series for drivers ages 10-16. Their feature on Saturday will be 70 laps in distance.

The Mini Cups vs. Bandoleros is a race within a race and the Bandolero portion of their opener was won by Ethan Nascimento. The victory was Ethan’s first win in the series and gives him the points lead ahead of his teammate, the 2018 champion Riley Massey. Drivers from both north and south of Madera are challenging for the Bandolero championship this year. Atwater’s Aiden Phillips topped the Mini Cup field on his birthday as well. Madera’s youngest drivers will race for 20 laps on Saturday.

Madera’s Hobby Stock drivers are fresh off a great race with the new North State Hobby Stock Series on April 13th where Howard Holden scored a lucrative $750 victory. The race did not pay track points, however, with the track championship still led by Steve Schermerhorn. Schermerhorn will try to go 3-0 for the year on Saturday. In Toyota Sedans, Jason Lawton has won all four main events this year.

Action gets started on Friday evening with practice from 5 p.m. – 8 p.m. Saturday’s program begins with pit gates opening at 12:30 p.m. Practices run from 2:15 – 3:45 p.m. with qualifying and heat races to follow. The first set of main events starts at 5:00 p.m. including the Mini Cup feature and the Late Model B Main. Opening ceremonies are at 6:00 p.m.