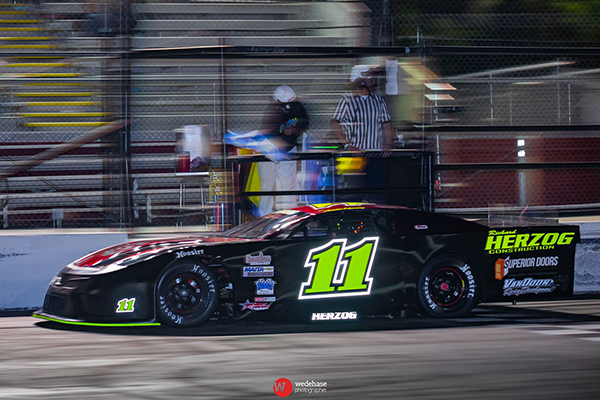 Former SRL Southwest Tour champion and Madera SRL winner Jacob Gomes drew the pole position and led the 21 Pro Late Models to green for the 80 lap contest. Gomes led an entertaining opening 27 lap segment that went non-stop with Carlos Vieira hot on his heels throughout the entire run. At several stages, more than half a dozen cars ran behind Gomes with all of them occupying the low line.

Gomes started to diamond the corners in a bid to maintain the lead after several nudges from Vieira. Lapped traffic forced drivers to navigate both high and low to pass them. The entire field earned a breather on lap 27 when the first caution flew.

Vieira was slow to get away from the outside on the restart, leading to a chain reaction crash involving Toni Breidinger and Christian Roche. Both cars managed to continue. Vieira then swept past Gomes on the next attempt to lead lap 28.

A caution on lap 31 lined up Herzog inside Vieira and the duo ran in a near dead heat alongside each other. Vieira led Herzog in side-by-side battling through restarts on lap 36 and lap 39. A caution on lap 46 involved Tyler Fabozzi spinning and getting clipped by opening night winner Dylan Zampa. The caution brought the field to the scheduled 50 lap break four laps early.

Ross Strmiska’s car broke under caution laps after the break was completed, ending his night from fourth position. Herzog continued his drives inside Vieira but Vieira maintained the lead on each attempt. Herzog finally tucked in behind Vieira on the outside line for several laps. Zampa charged through the field to occupy seventh only six laps after restarting at the rear.

Herzog and Vieira continued to race neck and neck with Matt Erickson climbing up to third. Erickson took several shots at taking the duo three-wide for the lead.

Herzog finally broke through for the top spot on lap 69 and appeared poised to motor away by five car lengths with Erickson up to second. Vieira engaged in a battle with Austin Herzog’s cousin Tyler Herzog that boiled over for a lap 72 caution with Vieira spinning. The caution nullified Austin’s strong advantage over Erickson.

The following restart saw Erickson attempt a crossover move on Herzog as they dove into turn three. They made contact, with Herzog nearly spinning the car in a tank slapping maneuver. Erickson took the lead as Herzog tried to gather the car but the caution flew for Tyler Herzog spinning backwards into the turn three wall. The race was reverted back to lap 75 and Austin Herzog maintained the lead.

Austin Herzog’s final restart was picture perfect and he managed to pull away for a 1.849 second victory ahead of Erickson, Gomes, Roche, and 18th starting Ryan Hart. Zampa was sixth.

Bakersfield’s Seth Wise led the first six laps from the outside pole position. Pole sitter Jadan Walbridge of Portland was eliminated from the race when he tagged a spinning Kasey Kleyn of Washington on lap six. Opening winner Tanner Reif of Las Vegas took over the lead on the ensuing restart from the outside.

Wise searched high and low to try to take the lead back from Reif. Iest used the outside line over a series of restarts to overhaul both Tyler Reif and Wise to take over second position by lap 32. A caution on lap 34 brought the field to the lap 40 break a few laps early.

A multi-car crash necessitated a red flag coming out of the break. Tyler Reif spun after contact from Jay Juleson. Reif was hit by Calvin Hegje who was then hit by Robbie Kennealy and Kercie Jung. Only Reif was able to restart – without his nose piece – while the other three cars suffered severe damage.

Several drivers attempted to challenge Wise for third position including Austin Edwards and Kyler Berry. Berry and Wise bounced off the frontstretch wall on lap 66 to end Berry’s evening after he tagged the turn one wall as a result.

A green-white-checkered finish followed after another incident two laps later. Iest had a strong restart from the outside to take the lead from Reif. They remained nearly side-by-side coming to the white flag. Reif made one last attempt on the inside of Iest but bounced off of his driver’s side door to spin across the finish line. Iest narrowly beat the spinning Reif to the stripe with Wise, Juleson, and the badly damaged car of Tyler Reif rounding out the top-five.

Mini Cup vs. Bandolero action also enjoyed a first time winner with Ethan Nascimento grabbing the Bandolero portion of the event ahead of rookie Dylan Baptista. Aiden Phillips was the Mini Cup winner. Ryan Reynolds claimed the Modified Super Toyotas ahead of brother Shaun while Jason Lawton was victorious in Toyota Sedans.