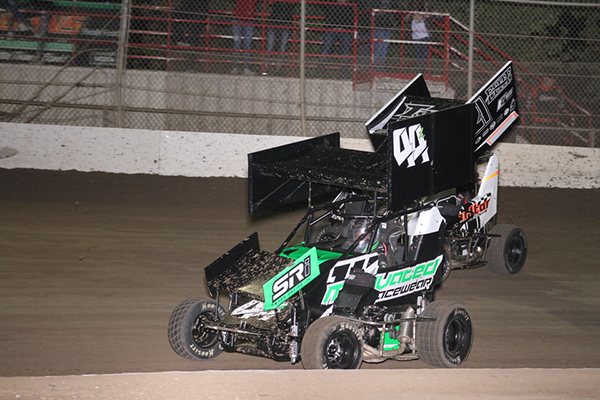 BRENTWOOD, CALIFORNIA (October 30, 2018) – A fifth place finish capped a successful month of October for Jeffrey Pahule, Jr., grabbing the top-five during the prestigious Turkey Bowl XVIII at Delta Speedway on Saturday night. Pahule left Friday’s heat race and qualifier racing with fifth in the overall points which he used to propel him to fifth in the 35 lap main event.

Pahule competed against 29 others in the Restricted division aboard his #44x for Teletech Communications and Motivated Racewear.

Qualifying was not held on Friday night but hot laps opened things up on the 1/7th mile dirt oval with drivers immediately finding the track to be hooked up and fast. A 38 pill draw placed Pahule in sixth in his heat race starting grid. Pahule managed to move up one position over the 10 lap distance to finish fifth.

Pahule ranked 14th in the points heading into the 15 lap qualifier, placing him on the pole for the second qualifier. He led all 15 circuits including a sizzling 10.09 second lap on lap six to record a comfortable victory.

The performance boosted him to fifth in the overall standings, allowing him to start fifth in the straight up 35 lap feature. Drivers in the feature hot lapped just before their A Main and he timed in seventh quick. He drove up to third at the start before falling as low as sixth.

He inherited the fourth position for a lap 25 restart after narrowly missing a tangle in front of him in turn two. A great battle developed between Pahule and Rickey Sanders, with the two racing side-by-side on many occasions in a very clean duel. Sanders ended up winning the battle on lap 34, with Pahule taking a hard-earned fifth place finish across the line.

The 2018 season continues on Friday and Saturday nights with the 6th Annual Lonnie Kaiser Memorial at Dixon Speedway.