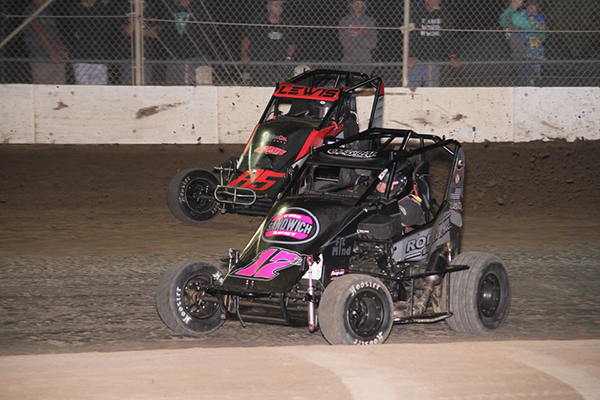 STOCKTON, CALIFORNIA (October 22, 2018) – Payouts nearing $20,000 headline the festivities for this weekend’s Turkey Bowl XVIII presented by Jason Bright Racing at Delta Speedway presented by Financial Center Credit Union. The popular postseason special event for Micro Sprints is expected to draw competitors from across the country. Each will be trying to grab their share of the prize money and to add to the prestigious history of the annual affair.

The previous winners list for the Super 600 Turkey Bowl reads like a who’s who of the sport. It includes 2017 winner Brandon Carey, a champion at the speedway in both Super 600 and Non Wing, plus chassis proprietors Jake Hagopian and Scott Coffman, Sprint Car and Midget standouts Michael Faccinto, Colby Copeland, Dalton Hill, and Ryan Bernal, and Micro veterans such as Brad Hannum, Ryan Reeves, and Scott Mauldin.

Restricted 600s at Turkey Bowl, featuring drivers ages 10-16, has routinely introduced young stars to the sport. Garth Kasiner won in 2017 to go along with his 2017 track championship, while 2018 Super 600 champion Nikko Panella was the 2016 Restricted winner and 2018 Non-Wing runner-up Caden Sarale won the 2015 Restricted event.

The youngest drivers in Jr. Sprints also get their chance to race for the Turkey Bowl spotlight with the 2017 edition won by 2018 Delta and King of California champion Dalton Parreira. 2018 Delta Restricted track champion Caeden Steele won the 2015 Jr. Sprint edition with Nikko and Alex Panella, Kasiner, and Sarale all among former Jr. Sprint Turkey Bowl champions.

Pit passes are just $20 each day with no membership required. Grandstand tickets each night are $10 for adults, $5 for kids 6-12, seniors 55+ and military, with kids 5 and under free! 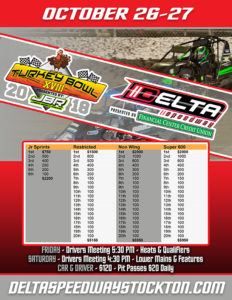