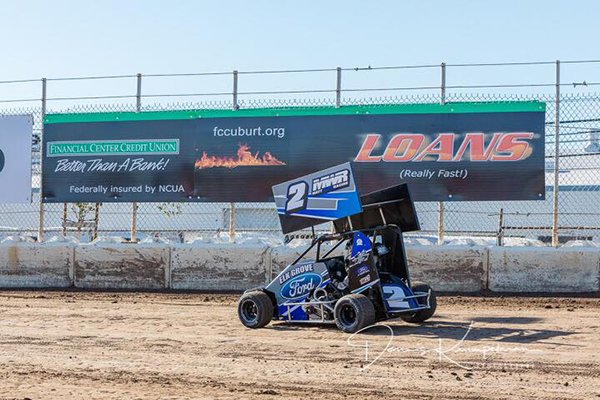 STOCKTON, CALIFORNIA (August 13, 2018) – The hotly contested $1000 to win Delta Speedway presented by Financial Center Credit Union championship battles are the focus of Saturday’s points race #10.  Both winged Super 600 and Restricted 600 divisions are shaping to go down to the wire on the 1/7th mile dirt oval speedway.

Both race teams and race fans have flocked to the San Joaquin County Fairgrounds for Micro Sprint racing during one of the most competitive and lucrative seasons in track history.  Super 600 and Non Wing race for $500 to win each in 30 lap features, while Restricted pays $300 for its 25 lap main events and even the youngsters in the Jr. Sprints compete for a $200 prize for their 20 lap races.

Raio Salmon looked poised to take the Super 600 championship but she faces renewed competition from Stockton’s Nikko Panella.  Panella finished second on August 4th while Salmon had a DNF with mechanical woes.  Her lead in the standings is just seven markers with 2014 champion Travis Labat in third.  Double duty racer Caden Sarale finished third in the last event to rank fourth in the championship, ahead of Alex Panella by one point.

Tyler “TJ” Smith won both the Super 600 and Non Wing features on August 4th then swept last weekend’s King of California Non Wing races in Visalia and Lemoore.  His Delta Speedway Non Wing points lead is 21 points over Sarale with Dan Moganga in third.  Brent Brooks and Blake McGourty round out the top-five in the standings.

A wild Restricted main event in round #9 had some championship implications with Caeden Steele returning to victory lane for the third time at Delta in 2018.  Steele leads the points standings over Caden Stoll by ten points.  Red hot Dylan Bloomfield is third in the standings and still 51 points behind after a third place finish in the last event.  With five points races to go plus the calculation of a drop race, this battle is expected to close up significantly at the end.  Devon Courtnier and Ashlyn Rodriguez make up the balance of the top-five.

“The Sheriff” Dalton Parreira leads the Jr. Sprints with five Delta Speedway wins this year and he will try for three in a row on Saturday night.  The remaining drivers in the top-five include Austin Wood, Caleb Debem, Selena Little, and Jett Barnes.Pit gates open at 1 p.m. with a 4:30 p.m. drivers meeting. Hot laps, qualifying, and racing action follow.