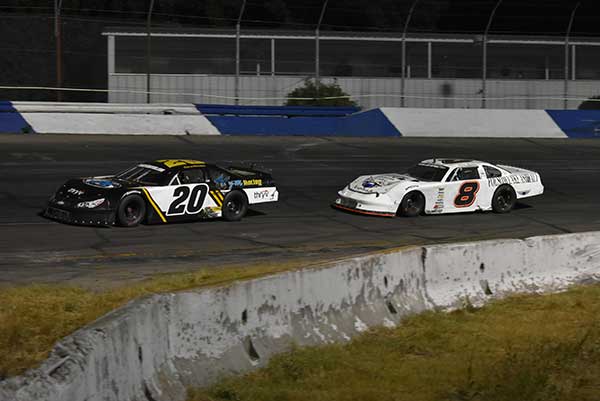 STOCKTON, CALIFORNIA (July 22, 2018) – 2015 Pacific Challenge Series presented by PenneyLawyers.com Rookie of the Year Cole Moore outlasted a challenging evening at Stockton 99 Speedway for his second PCS win of the year, Saturday night.  Moore came out on top over points leader Jason Romero in a thrilling battle in an attrition-shortened 60 lap sprint race.

Romero set the standard of the night early with a 13.366 lap in time trials to take the Sunoco Fuels Fast Time by .147 seconds on the field.  Romero only mustered eighth in the American Racer Tire Dash while 2016 series Rookie of the Year Matt Wendt won the dash for the pole and a set of tires.

Wendt led early while third starting John Moore made slight contact with his son Cole to take second on lap two.  Moore then passed Wendt for the lead on lap nine as the top nine cars ran closely together.  Romero was still mired in eighth, facing a battle with Michael Sandoval.

Cole Moore and Wendt made contact in turn one for a lap ten caution, with Cole using the “tap out” rule to accept blame for the incident.  It put Cole Moore to the rear of the field and Wendt back into second place.

The contact proved to cause significant damage to Wendt’s rear end, however, as he faltered coming to green causing an accordion of bumping among the field before he retired to the infield.

John Moore then spun abruptly into turn three on lap 13 while leading, gathering up former track champions Matt Scott and Dave Byrd in the process.  Moore’s spin was caused by a blown engine and Scott was eliminated from the race as well.  Mike Ray had his second spin of the race on the following restart, reducing the field to six cars running.

The race was then shortened by officials to 60 laps as the top six battled to the finish.  Sandoval and Byrd had an incident that caused a quick yellow and bunched things up.  Cole Moore took the lead from Romero on lap 20 followed by Madera winner Carlos Vieira, before Vieira faded behind the top-two.  Romero showed Moore a nose on lap 43 and tried again as they approached promoter Tony Noceti’s $500 bonus for leading lap 50.  Cole Moore led that lap while Romero stayed in lockstep.

They remained in lockstep down to the wire.  Romero took a look inside when Cole went up the hill in turn two on the final lap.  Moore wisely defended the inside line through turns three and four and motored away for his third career Pacific Challenge Series victory.  Romero extended his points lead from second with Vieira, Beeler, and Sandoval the top-five.  Romero also won the Penney Racing Supply Hard Charger for his run from eighth to second.