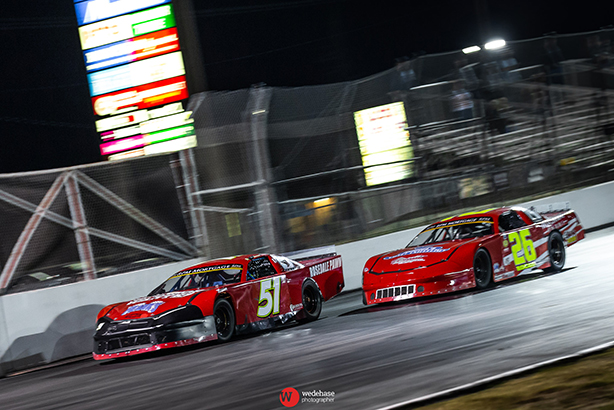 MADERA, CALIFORNIA (May 26, 2018) – Bakersfield’s Racin Vernon avenged his round three misfortune to take a dominating win in Saturday’s Military Tribute Night at Madera Speedway, leading all 80 laps for the $2,000 victory.  Vernon has led a total of 138 laps over the last two races in the challenging RPM Mortgage Pro Late Model Series on MAVTV.

Vernon led 58 laps in the April’s round #3 before spinning from the lead.  Blaine Rocha took advantage to take the victory and parlayed that into fast-time in this weekend’s round four.  The 33 car turnout was narrowed to 22 starters after a 25 lap B Main.  Rick Thompson won the $500 non-qualifiers portion of the B Main.

Rocha started from the pole on a straight-up start but immediately yielded the lead position to Vernon.  Two-time series champion Buddy Shepherd immediately slowed from the second row with a broken third link and retired to the pits.

A pair of cautions slowed racing on laps eight and nine and brought on the new Texas style restarts with Vernon by himself while Rocha was outside of third running Austin Herzog on each attempt.  2016 champion Matt Erickson and Glen Cook staged a long and sustained side-by-side race for fourth behind them.  The caution flew again on lap 14 when Garland Tyler stalled in turn two after possibly tagging the front stretch wall.

Logan Zampa jumped outside Cook to take fifth on the restart with Kyle Gottula following suit for sixth.  Rocha started to peek inside Vernon for the lead before a caution on lap 22.  Erickson got swallowed up by both Gottula and Zampa on the following green flag run.  The race’s next caution did not fall until lap 48 when Vernon tangled with lapped car Nick Grossi.  Grossi spun and in the ensuing melee Cook drove hard into the front end of Zampa while Erickson suffered heavy front end damage as well.

The caution ended up bringing the field to the lap 50 break two laps early, with only Grossi ruled as an involved car.  Cook’s race was over, however, with heavy damage while Erickson pitted in the infield for repairs to surrender his track position and restart at the rear.  Zampa and Vernon were able to continue on unscathed.

After adjustments and MAVTV interviews, racing resumed with Vernon, Rocha, and Herzog maintaining the top-three positions throughout cautions on lap 61 and 72.  Zampa and Gottula moved past Herzog and staged a spirited race for third that ended with them tangling into turn one.  Gottula spun forcing Ryan Philpott to come to a stop. Round #3 podium finisher Jack Wood slammed into the back of the parked Philpott to end both of their races.  Gottula’s race was over as well with a broken rear panhard bar, while Zampa was penalized to the back of the pack.

A five lap shootout saw Vernon successfully hold off Rocha and Herzog for the win.  B Main winner Ross Strmiska came from 17th to finish fourth ahead of 19th starting Dillon Tucker in fifth.

A straight up start in the 70 lap 51FIFTY Energy Drink Junior Late Model Series race proved to the benefit of 2017 champion Jesse Love as he took a convincing victory.  Love led the entire 70 lap affair after a sizzling 15.117 second lap in qualifying for a new track record.

His drive towards his eighth win in just his 12th Jr. Late Model start began from the pole.  Love led comfortably ahead of second in points Tanner Reif of Las Vegas and 2018 two-time winner Dylan Zampa.  The 11 car field for drivers ages 10-16 raced under green for 37 consecutive laps.  The caution finally came out when Reif spun into the turn four wall after apparent contact with lapped car Calvin Hegje.

The caution ended up being the impetus for the lap 40 break, two laps early like in the Pro Late Model division.  Smooth sailing continued out of the break with Love continuing his impressive performance.  Zampa drove up to his rear bumper a few times but never was close enough to capitalize.  Love coasted to a 1.6 second victory over Zampa and 10 year-old Tyler Reif.  Kayla Eshleman drove from seventh to finish fourth, while Austin Edwards nipped Kabe McClenny for fifth by a nose at the finish.

Mini Cups vs. Bandoleros had their largest car count of 2018 with 13 entries in the pits.  The race is a two-races-in-one event with two separate trophies awarded.  Two-time Bandolero winner Kercie Jung of Bakersfield led the opening lap before Seth Wise led the second lap.  Jung then wrestled the lead back which she held until lap ten.  Wise led lap 11 before Jung spun on lap 12 for the race’s first yellow flag.

The yellow flag tightened up the race for the Mini Cup victory as well, as three-time winner Kale McClenny had contact with Aaron Thomas that saw McClenny’s entire front bodywork come off.  Thomas was charged to the rear of the field for his involvement in the incident.

Jung quickly drove back through the field up to second behind Wise, while third running Riley Massey spun in turn four.  Massey, winner of the third race, turned her car back around and continued but lost a lap in the process.  Seth Wise took the Bandolero checkered flag and the overall win over Kercie Jung and Hank Hall, while Jayce McArthey won the Mini Cup trophy narrowly over Thomas and McClenny.

Modified Super Toyotas had five different leaders and five lead changes in their eight car, 25 lap event.  John McCollum, Jr. led lap one before spinning out from the lead on lap two.  Dave Lander led laps two through four before Bert Stephens held court.  Stephens led the race to lap 16 before getting tagged by Ryan Reynolds into turn one to send him spinning.  Both restarted at the back.  Patrick Geiger assumed the lead which he held for only one lap before it was Lander back out front.  Geiger managed to close back down on Lander, taking the top position on lap 20 and leading to the finish.  Reynolds and Stephens drove back to the front to finish second and third respectively.

A full inversion for the Toyota Sedans did not deter 2016 champion Jillaun Holden.  Kurt Davison led lap one before rookie Greg Tyler took over.  Meanwhile Holden and Tim Curtis were cutting through the pack one-by-one.  Holden finally passed Tyler on the outside for the lead on lap 19 and took the 25 lap win while Curtis was second ahead of Tyler.

Madera Racing on MAVTV airs Thursdays re-runs of the 2017 season every week.  The show airs at 5 p.m. and 8 p.m. PST and is also available on the Lucas Oil Racing TV app.  New 2018 episodes will begin airing June 7th.