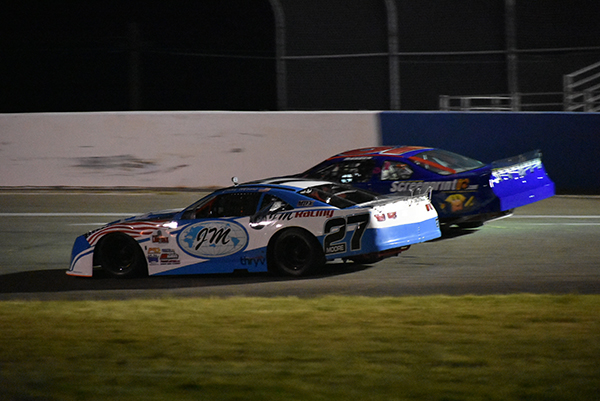 SACRAMENTO, CALIFORNIA (May 16, 2018) – Round #3 of the 2018 Pacific Challenge Series presented by PenneyLawyers.com will tackle the challenging Ukiah Speedway with Super Late Model action on the quarter-mile oval.  Saturday’s race will be the only Ukiah stop out of the eight race touring stock car series.

2015 Pacific Challenge Series champion John Moore of Granite Bay holds that same title in 2018, after a narrow runner-up finish in the 2017 championship.  Moore comes into Ukiah fresh off an American Racer Tire dash victory at Shasta in April that he parlayed into a come-from-behind fourth place finish.  Moore also finished third in the season opener at Madera in March.  His record at Ukiah includes four top-fives including a fourth place finish in 2015 on the championship finale.

2015 Roseville Pacific Challenge Series winner and 2006 Westcar Late Model Series champion Shannon Mansch has rocketed up to second in the points.  Her second place finish at Shasta breaks her tie for second in the standings with 2014 and 2017 champion Mike Beeler.  Mansch has just one PCS start at Ukiah that yielded an eighth place finish in 2015.

Beeler has been one of the most successful drivers at Ukiah in series history, amassing nine starts, seven top-fives, and one win.  Beeler and Mansch trail Moore by a narrow two point margin and will try to close that gap on Saturday.

Jason Romero’s sixth career PCS win at Shasta has moved him up to fourth in the standings, just four points out of first.  Tracy Bolin’s fourth place outing at Madera has him fifth in the championship.

A trio of drivers find themselves deeper in the standings than they would have liked going into the year, with all of them aiming to turn their fortunes around at Ukiah.  14-time stock car champion Dave Byrd is sixth in the standings ahead of former Rookie of the Year drivers Cole Moore and Matt Wendt.  Both have had race winning speed in previous Ukiah attempts, with Wendt coming close to victory last July at Ukiah.  Combined across four starts each, the duo has only tallied three top-fives collectively at the bullring.

Madera opening night winner Carlos Vieira and last July’s Ukiah winner Randy Hedrick round out the top-ten in the standings.  Redwood Valley’s Kolby Berry aims for his PCS debut after a productive career in Junior Late Models, and will be joined by Ukiah’s John Dalerio as some of the drivers looking to defend their home turf.

Action gets underway on Friday with practice from 6pm-9pm.  On Saturday, grandstands open at 3:30pm with racing at 5pm. Adults are just $12, Senior/Student $9, Children 6-11 $6, and kids 5 and under are free! The family pack for 2 adults and 3 kids is $30.  Ukiah Speedway is located at the Redwood Empire Fairgrounds.  Bandoleros, Bombers, Legends, Jalopies, Jammers, and Pro 4’s will also be competing.