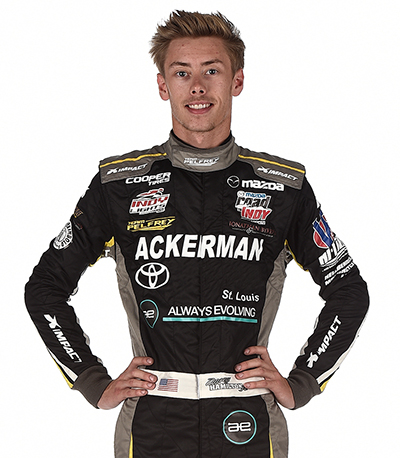 INDIANAPOLIS, INDIANA (May 18, 2018) – The Hamilton name returns to the world’s greatest race course next week, when third-generation driver Davey Hamilton, Jr. climbs aboard the bright yellow #2 Team Pelfrey Indy Lights car for the Freedom 100 at Indianapolis Motor Speedway on May 25th.  Hamilton will continue the legacy started by his grandfather and continued by his father Davey, Sr.

Davey Hamilton, Sr. made 12 starts in the Indianapolis 500, setting the stage for the career path that 21 year-old Hamilton, Jr. aims to follow.  Hamilton, Jr. has had a varied career of national sprint car championships, USAC Silver Crown competition, and Stadium Super Trucks.  The Freedom 100 will mark his third start in the Indy Lights after making his debut in 2016 at Laguna Seca for a double-header weekend.

“There hasn’t been a Hamilton here since 2011.  To bring it back is really exciting and I’m looking forward to it,” Hamilton said.  “I’ve been talking with Pelfrey since 2014 so now that we’re finally able to put something together it is exciting.  I know they have a proper program and they can compete up front.”

Hamilton will embark on a busy month of May surrounding the Freedom 100.  His week begins on Monday May 21st with the open test for the Indy Lights.  The track will be hot from 10am to 11:30amand again at 4:30pm to 6pm

Friday May 25th marks the Freedom 100 as part of Carb Day festivities at Indianapolis Motor Speedway.  The race airs live at 12:30pm Eastern on NBC Sports Network.  Hamilton ends the busy week with the prestigious Little 500 on Saturday night.

You can learn more about Davey Hamilton, Jr. on Facebook, Instagram, and Twitter.  He will be available for media appearances throughout the month of May by contacting Steven Blakesley (916) 316-4854.

Davey Hamilton Jr. is sponsored by: