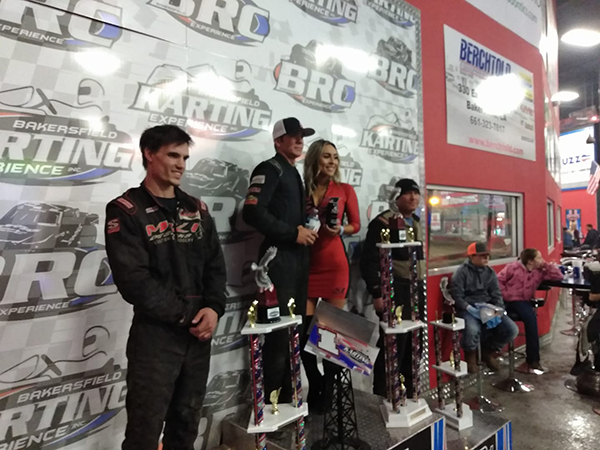 BAKERSFIELD, CALIFORNIA (January 20, 2018) – Tate Sanders wrapped up his inaugural weekend in Outlaw Karts in a big way, scoring the $1000 Bakersfield Indoor Kart Nationals win on Saturday night at Bakersfield Karting Experience.  Sanders finished second in Friday’s night preliminary main, then climbed from the B Feature on Saturday to top the 24 car field on hand.

Brandon Williams of Redding, CA led the 12 kart field to green for the 30 lap feature and led early.  The race was punctuated early by a wreck on the backstretch where Chowchilla’s Eric Humphries hit the wall head-on, after being hooked by Bruce Nelson.  Humphries, who won his B Main after finishing second in Friday’s feature, was done for the evening.

Colton Raudman and Josiah Ribeiro tangled for third on a later restart, but Raudman was able to continue on from the back of the field.  Sanders marched forward and took over second past halfway before turning attention to Williams.  Williams and Sanders ran in lockstep for several laps in a very close battle before the major turning point of the race.  Marc Foglio spun on the backstretch and lost a wheel.  Williams clipped the wheel and went upside down in turn three for a red flag.

Sanders assumed the lead while Sutter’s Tyler Seavey and Bryan Watson dueled for third.  Their battle ended with Watson going over the top of Seavey in a multi-car crash in turn one that ended both of their nights.

Sanders faced new company from Ribeiro with the duo trading slidejobs before Sanders managed to pull away.  The checkered flag, $1000, and the driller trophy went to Tate Sanders with Ribeiro second and Williams charging back to finish third.  Raudman and Roger Guthrie rounded out the top-five.

The Clone Kart 25 lap main event had several cautions early before things settled down and Fresno’s Mitch Cornelius stepped out front and never looked back.  Cornelius held off a late charge from Timothy Crews for the $200 win with Chowchilla’s Christian Hickman rounding out the top-three.

Activity continues at BKE on January 24th with the first League Night of 2018.  More details coming soon!  The top-ten drivers of the night will duel in a 10 lap, $100 to win feature on each league night.