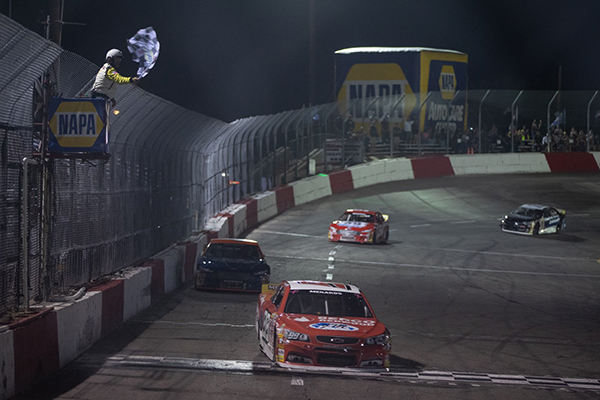 ROSEVILLE, Calif. (October 2, 2022) – Granite Bay’s Cole Moore became the fifth consecutive first-time winner in the history of the NAPA AUTO PARTS 150 at All American Speedway in Roseville, scoring a coveted ARCA Menards Series West triumph before a crowd of thousands at his home speedway. The 2020 Late Model track champion steered the Bill McAnally Racing No. 99 Chevrolet to the win as part of a six-division card at the one-third mile oval. Photo by Diego Alvarado

Moore made his decisive move around the outside of points leader Jake Drew on lap 143 and never relinquished the lead.

“This is the best crowd I’ve ever seen at Roseville. Thank you guys for being here. This means so much to me, Moore said. “It’s that top on those restarts. I was able to save my tires. I was riding up there all race. My plan worked out. We’ve been trying hard all year. It’s not like Bill McAnally Racing to go this deep into the season without a win. For me to make that happen, even better.”

Four-time 2022 winner Jake Drew of Fullerton, Calif. scored the General Tire pole position in time trials while Moore started third. Madera’s Joey Iest nabbed the lead around the outside of Drew on lap 28. Moore steadily advanced, taking over second on lap 37. Moore began to work the outside line of the speedway and closed on Iest before a caution on lap 50.

Moore challenged Iest on the outside on the restart before the caution flew for 2021 track champion John Moore spinning. Cole Moore seized the lead for the first time in the race on lap 67 on the restart. Lapped traffic proved challenging, with Moore having to drive up the middle of a three-wide pack just past lap 100 to maintain the lead over Iest. Drew drove up to second, then took the lead back from Moore on lap 121.

Brandon White of Eureka and his substitute driver Kris Price overcame an adventurous Foothills Tow Modified feature to win the 2022 championship. Roseville’s Tyler Wentworth paced the field through numerous cautions and incidents for his first win of the year.

After qualifying and heat races, Rick Andersen of North Highlands was within four points of the championship. But collisions relegated him to a fifth-place finish in the main event and ultimately third in the standings. Wentworth topped Sammy Nuno, Price, Cody Bailey, and Andersen at the finish. Foresthill’s Jon Yourd bounced into the front stretch wall to end the race prematurely after contact with Auburn’s Derrick Doering. Yourd was fortunately uninjured.

Tracy’s Brendan Ruzbarsky prevailed in the return of the Legends Tour Series to Roseville for its first appearance since 2019. The 35-lap win paid $2,000. Former track Jr. Late Model champions Aidan Daniels of Fort Bragg and Kenna Mitchell of Loomis battled up front, with Daniels leading lap one. Ruzbarsky then drove past Daniels on the outside to lead lap four. Mitchell’s race ended early when she was knocked into the front stretch wall on lap four.

Ray Molina of Roseville earned another F4 championship while Rocklin’s John Sproule won his second main event of the year. 17 four-cylinder cars competed in the main event. Sproule battled side-by-side with Molina and led lap one from the inside. Multiple cars went underneath the 16.5 second breakout rule, shuffling the order. 2021 champion Matthew Fuhs of Roseville ran down Sproule to take the lead on lap 12, but Sproule drove back to the lead on lap 13.

Fuhs drove underneath Sproule again and Sproule crossed him over. Sproule narrowly held the lead on lap 20. Mario Novelli and Vic Theberge collided for a caution flag, setting up a green-white-checkered finish. Sproule hung on for the win over Fuhs, Molina, Citrus Heights’ Dan Cherry, and Sun Valley, Nevada’s Rich Innis.

All American Speedway concludes its 2022 season on October 22 with the Malicious Monster Truck Tour. A matinee show at 3pm and a night show at 7pm will be offered.