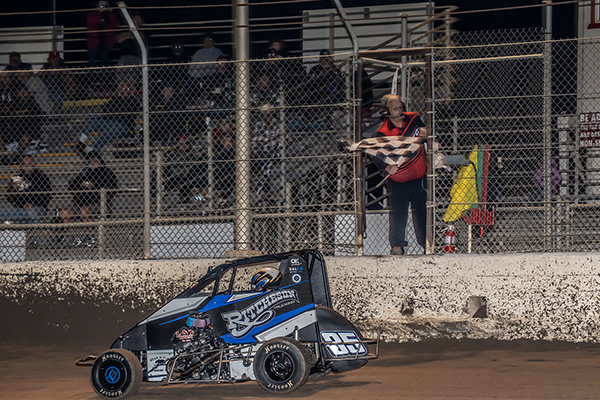 STOCKTON, CALIFORNIA (September 18, 2022) – Red Bluff’s Carsen Perkins, the 2020-21 Red Bluff Outlaws Outlaw Kart champion, broke through in the Micro Sprint ranks on Saturday night with his first Delta Speedway presented by Valley Strong Credit Union win. Perkins’ Non-Wing victory was part of a four-division lineup during the penultimate round of the 2022 series in Stockton. Photo by Maxwell Patrick Imagery

An eight-car invert placed Perkins and his No. 35 Micro Sprint on the pole position for the $500-to-win, 30-lap affair. Perkins was repeatedly challenged by Sarale in a close duel. Sarale showed his nose in turn three on lap 17 to no avail. He tried the outside a lap later and drove around the top of Perkins to lead lap 19. The caution flew a lap later for Cody Gray stopped at the top of turn four. Former champion Dan Mognaga of Valley Springs stopped in turn two to surrender third on the restart.

Perkins answered back with a move around the outside but was unable to complete the pass. Sarale drove wide in turn three on lap 24 and surrendered multiple positions including the lead to Perkins. Perkins held off Gilbert for the breakthrough win. Austin Torgerson finished third followed by Brentwood’s Jeffrey Pahule with Sarale having to settle for fifth.

Stockton’s Nikko Panella extended his points lead in Super 600 with his third winged win of the year worth $500. Panella bested the 16 entries in time trials with a 9.174 second lap while heat races were claimed by Austin Torgerson and Caden Sarale.

Panella started on the pole for the 30-lap feature. The action slowed on lap three for Austin Torgerson stopping inside of turn one. Panella cruised to a strong 1.374 advantage at the checkered flag. Elk Grove’s Devon Courtnier nabbed second from San Jose’s Nate Matherly on lap 16 then held it to the finish. Ninth-starting Alex Panella of Stockton finished fourth ahead of tenth-starting Pahule.

Andrew Smith of Castro Valley won his fourth 25-lap Restricted feature of the year which paid $300 to win. Points leader and seven-time 2022 winner Lucas Mauldin of Rancho Murieta was the quickest qualifier. Kyle Fernandez of Tracy and Hayden Stepps of Oakdale earned the heat race wins.

Mauldin started on the pole with Smith in pursuit. That pursuit bore fruit as Mauldin got mired behind a lapped car in turn one on lap 15. Smith took advantage to drive by into the lead on lap 16. A caution fell on lap 18 for Levi Osborne of Tracy and Mickelina Monica of Livermore crashing on the backstretch.

Smith held off Mauldin over the final six laps with 2021 Jr. Sprints champion Brody Rubio of Manteca finishing third. Fernandez and Peyton Whitehouse of Pleasanton rounded out the top-five.

Maya Mauldin of Rancho Murieta won her third Jr. Sprints feature of the season and closed within 37-points of points leader Briggs Davis of Manteca with one round remaining. Heston Stepps of Oakdale, Haven Sherman of Citrus Heights, Davis, and Mauldin were the four heat race winners. Nathan Fernandez of Tracy and Colton Hale of Manteca shared the front row for the 20-lap feature which paid $200 to win.

Fernandez led the first two laps before he slowed and fell to third. A multi-car crash on the backstretch then brought out the red flag.

Mauldin assumed the lead and never relinquished it for the win while Davis drove from sixth to finish second. Stepps ran third followed by ninth-starting Jackson Tardiff of Vacaville and Kyle Klagenberg of Arboga.

Delta Speedway crowns its 2022 champions on Saturday October 1 with all four regularly scheduled divisions in action!