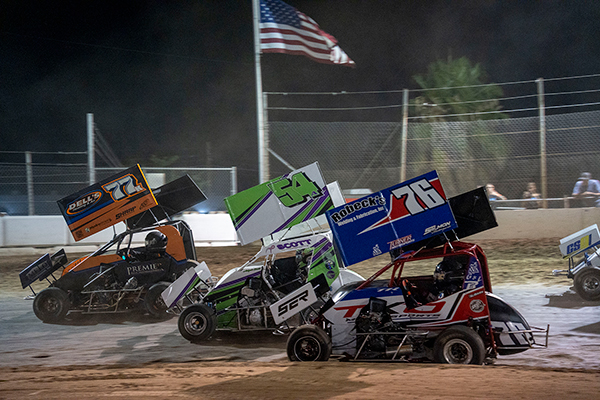 STOCKTON, CALIFORNIA (August 2, 2022) – The ninth race of the 2022 Delta Speedway presented by Valley Strong Credit Union season hits the 1/7th mile dirt track in Stockton this Saturday night. Four divisions of Micro Sprints compete at the speedway in search of $1,000-to-win track championships and a place in the history books. Photo by Maxwell Patrick Imagery

All seats are general admission, priced at $10 for adults, juniors ages 6-12, seniors, and military are $5, while kids 5 & under are FREE! Pit passes are $20. Tickets can be purchased through MyRacePass or at the gate. Drivers meeting is at 4:30pm with hot laps and qualifying to follow. Fans who cannot attend can also see flag-to-flag coverage on The Cushion, the speedway’s Pay-Per-View partner this year.

Stockton’s Nikko Panella has driven into the points lead in both the winged Super 600 and the Non-Wing divisions, looking to join Ripon’s Brandon Carey and Stockton’s Caden Sarale as track championship sweepers.

Panella’s bid for the Super 600 title is being challenged by Medford’s Ashton and Austin Torgerson. Ashton trails Panella by just 24-points and he has equaled Panella’s two victories this year. Sacramento’s Austin Wood and Brentwood’s Jeffrey Pahule round out the Super 600 top-five with a 30-lap feature for $500 to win on tap.

Panella has won three features in Non-Wing but his lead is a scant eight points over Austin Torgerson, owing to the competitiveness of the division. Pahule has two victories and third place in the standings while Ashton Torgerson is fourth. Austin Wood rounds out the top-five. With the same five drivers occupying the top-five in each division, can a fresh face like Jett Barnes of Visalia break through for a 30-lap, $500 victory?

Five wins in eight starts have lifted Rancho Murieta’s Lucas Mauldin to a 68-point lead in the Restricted standings. 2021 Jr. Sprints champion Brody Rubio of Manteca has six top-five finishes this year but looks to grab a $300 win in Saturday’s 25-lap race. Adrianna DeMartini has slipped to third in the order ahead of Pleasanton’s Kellan Harper and Tracy’s Kyle Fernandez.

Manteca’s Briggs Davis has led the Jr. Sprints championship from the drop of the 2022 green flag but has company at the top of the standings. Vacaville’s Jackson Tardiff has used two victories to close within three markers of Davis for the title. Maya Mauldin’s one win has her placed in third in the points followed by Oakdale’s Heston Stepps and Haven Sherman of Citrus Heights. Twin qualifying heat races and a 20-lap feature for $200 to win await the youngest drivers at Delta Speedway.

Courtesy of C&P Promotions, all member drivers in Juniors and Restricted who race at least 12 of 14 events will be eligible for drawings for a new Yamaha engine core and a new PMP chassis 600 frame and body.

Stubborn Rods will offer one custom made fishing rod per month to a randomly selected race winning driver as well. Lucas Mauldin won the fishing rod after winning on May 21st in Restricted!