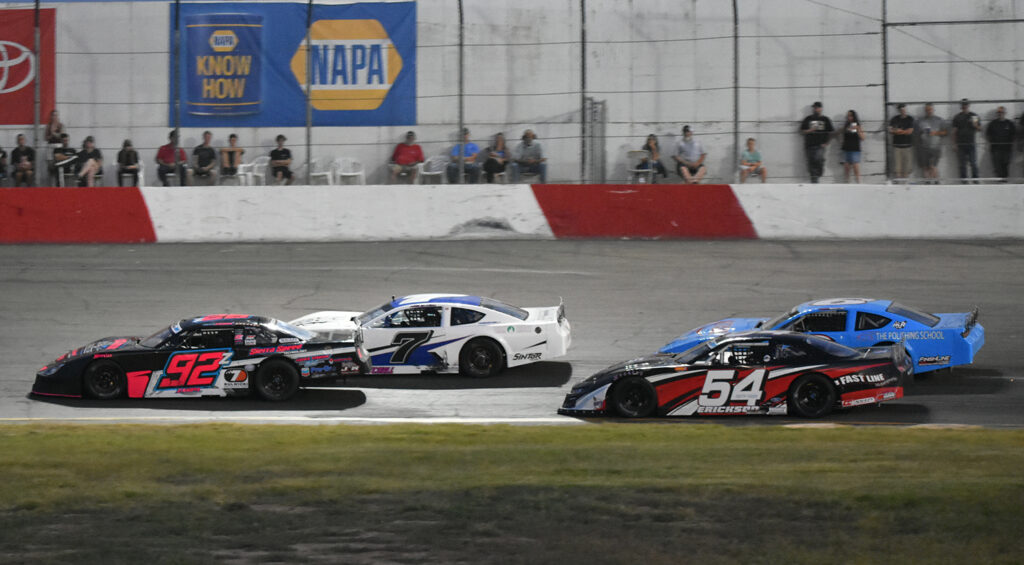 ROSEVILLE, Calif. (July 19, 2022) – All American Speedway powered by Roseville Toyota hosts the Summer Classic MartinoWest Night at the Races on Saturday July 23 with the NASCAR Advance Auto Parts Weekly Series in action. Festivities will include a pre-race muscle car display and autograph session at 5pm behind the main grandstands. The cars will also participate in a parade during opening ceremonies before turning things over to the NASCAR competitors for seven main events of action. Photo by Patriot Media

Outlaw Drift will stage high-speed precision exhibitions for the first time ever at a NASCAR race in Roseville as well!

Grandstands open at 5pm followed by heat races at 5:30pm. Opening ceremonies are at approximately 6pm with main events to follow. Tickets for the Summer Classic are available online at www.AllAmericanSpeedway.com All seats are general admission, priced at $20 for adults, juniors ages 6-12 are $15, and kids 5 & under are FREE!

Zampa recovered to win the second 35-lap feature of the night for his eighth win of the year. He leads Mitchell by 54 points heading into Saturday’s Twin 35-lap contests, presented by the Roseville Moose Lodge. 2021 runner-up Thomas Martin of Auburn, Fort Bragg’s Aidan Daniels, and Loomis’ Michael Mitchell round out the top-five.

The Foothills Tow Modified duel was also intense on July 9, pitting championship contenders Brandon White of Eureka and Rick Andersen of North Highlands alongside each other. They raced side-by-side over the final seven laps with White winning by just .034 seconds. White moved into the points lead as well, leading Andersen by just four points. Sammy Nuno of Windsor, Roseville’s Tyler Wentworth, and Cody Bailey of Colfax are the balance of the top-five with a 30-lap main event scheduled.

The Jr. Late Model division has ratcheted up the excitement level in 2022 with its largest fields in track history and distinct parity with no repeat winners this season. Fort Bragg’s Trey Daniels leads the standings ahead of former Mini Cup/Bando track champions Colton Nelson of Auburn and Bella Thomsen of El Dorado Hills. Other winners this year include Vito Cancilla of Martinez, Fort Bragg’s Lane Anderson, and Sacramento’s Chase Hand. 30-laps is on tap for the drivers ages 10-16 years old.

Granite Bay’s Dayton Broyles has two wins and a 55-point lead in the Mini Cup/Bando division. Stockton’s Lucas Burton and Meadow Vista’s Cash Page have also been regulars in the series for Roseville’s youngest drivers.

Additional information on fan attendance is available at www.AllAmericanSpeedway.com  Competitors will participate in practice activities on Friday before racing on Saturday. Grandstands open at 5pm followed by heat races at 5:15pm. Opening ceremonies are at 6pm with main events to follow.