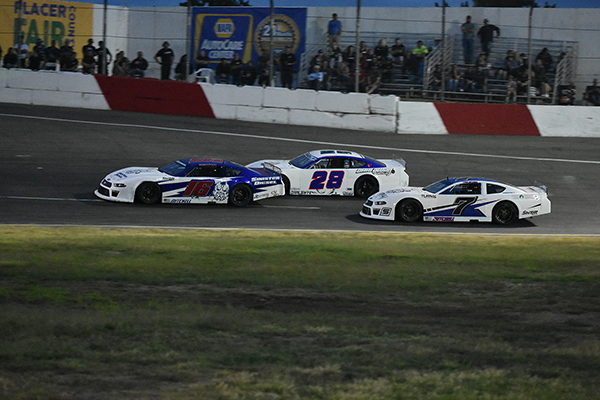 Grandstands open at 5pm followed by heat races at 5:15pm. Opening ceremonies are at 6pm with main events to follow. The Riebes Auto Parts Trailer Bash closes the show followed by Fireworks! Tickets for Salute to America Fireworks Night are available online at www.AllAmericanSpeedway.com All seats are general admission, priced at $20 for adults, juniors ages 6-12 are $15, and kids 5 & under are FREE!

One of the most competitive seasons of NASCAR Berco Redwood Pro Late Model racing has seen an unlikely feat, with Napa’s Dylan Zampa going seven-for-seven in the black and pink No. 92 car. Loomis’ Michael Mitchell and Auburn’s Thomas Martin have given Zampa his toughest challenges and are just one point apart in the battle for second in the standings. Kenna Mitchell of Loomis has surged to fourth in the championship and six just points out of second. Fort Bragg’s Aidan Daniels rounds out the top-five heading into Saturday’s Twin 35s.

Rick Andersen of North Highlands opened the Foothills Tow Modified season with a pair of wins which has him in the points lead over June 4 winner Brandon White of Eureka. Windsor’s Sammy Nuno, Roseville’s Tyler Wentworth, and Colfax’s Ralph Bailey make up the balance of the top-five. Both the Modifieds and the Riebes Auto Parts Super Stocks compete in 30-lap features. Roseville’s Josh Whitfield is undefeated with four wins in the Super Stock division to lead Phil Wilkins of Roseville, Antelope’s Terry Thomas, Jr., Galt’s Larry Thornhill, and Roseville’s Jeremy Fritts in the standings.

One win has been enough for Ray Molina of Roseville to lead the F4 competition ahead of Roseville’s Nathan Cleaver, Rocklin’s John Sproule, Sun Valley, NV’s Rich Innis, and Citrus Heights’ Vic Theberge. The F4s compete in a 25-lap main event.

The Riebes Auto Parts Trailer Bash competitors compete for a $1,000 in a 15-lap contest. A $250 Master of Disaster prize is also offered along with $250 for the best-looking trailer as voted by the fans! Drivers must cross the finish line first and survive with their trailer attached to be the winner of the race.

A single win has also been enough for Fort Bragg’s Trey Daniels to lead the Jr. Late Models championship for drivers ages 10-16 years old. Former Mini Cup champions Colton Nelson of Auburn and Bella Thomsen of El Dorado Hills will be in pursuit of their first wins in Saturday’s 30-lap race. The youngest winner in track history is 10-year-old Vito Cancilla of Martinez who triumphed on June 4th.

Additional information on fan attendance is available at www.AllAmericanSpeedway.com  Competitors will participate in practice activities on Friday before racing on Saturday. Grandstands open at 5pm followed by heat races at 5:15pm. Opening ceremonies are at 6pm with main events to follow. The Riebes Auto Parts Trailer Bash closes the show followed the A-All Mini Storage Fireworks, presented by the Roseville Moose Lodge!