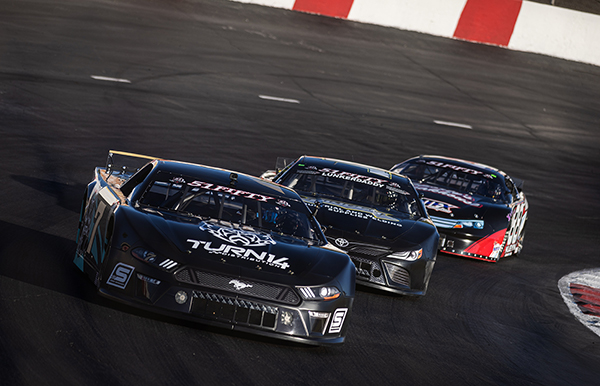 MADERA, CALIFORNIA (June 22, 2022) – Madera Speedway and its MAVTV-televised Late Model drivers will honor Reverend Ron Spencer with Saturday’s Red, White, and Blue Classic at the fastest one-third mile in the west. The late Ron Spencer was a fixture at the track for many years, developing a close relationship with many of the drivers and teams. They will be extra motivated to go for victory, bolstered by a spectacular trophy up for grabs in the 80-lap Lunkerdaddy Pro Late Model and 70-lap 51FIFTY Jr. Late Model Series events. Photo by Ethan Smith

The growing INEX Legends Tour and the INEX Bandoleros will also compete during this special night of action. Adult tickets are $20, seniors are $15, youth ages 6-12 are $10 and kids five and under are free. All tickets will be sold at the track ticket booth the day of the event. Race fans can “Join” www.YouTube.com/ShortTrackTV for $19.99 per month for a members-only live stream as well.

Vancouver, Wash.’s Jadan Walbridge and Las Vegas’ Kyle Keller have staged one of the most closely matched championship battles in the eight-year tenure of MAVTV-televised Pro Late Model racing in Madera. Walbridge and Keller traded the lead back-and-forth in a 40-lap long battle in round three, then nearly duplicated the duel with almost 20 laps of challenges in round four. Walbridge came out on top in both features, boosting himself to the championship lead by six points over round two winner Keller.

Ethan Nascimento has led 20-laps at the front of the pack in his first full-time season, with the double-duty driver ranking third in the standings. Eagle, Idaho’s Jacob Smith ranks fourth in the Charlie Wilson-prepared No. 11 machine followed by Shelden Cooper of Clovis in fifth.

Perennial contender Jason Aguirre is sixth in the standings ahead of opening night winner Matt Erickson. Erickson won the inaugural Ron Spencer event in 2018 and enjoyed a close relationship with Ron throughout his racing career. Santa Clara’s Pete Soto, and rookie brothers Shaun and Ryan Reynolds round out the top-ten.

The Pro Late Model competition has attracted some returning contenders as well including Bakersfield’s Seth Wise. Wise has a pair of third-place finishes in his limited attempts at Madera Speedway after graduating from the Jr. Late Models. San Jose’s Jay Juleson is also a Jr. graduate who finished sixth in the 2021 championship on the strength of a pair of fourth place runs.  San Diego’s Matthew Meech scored a third-place finish in the 100-lap Triple Turkey Open last October and returns to the speedway as well.

Saturday’s Ron Spencer Classic is an 80-lap contest with a 50-lap opening segment and a 30-lap race to the finish.

Newport Beach’s Sean Hingorani has been sensational in the last two rounds of the 51FIFTY Jr. Late Model Series, going 2-0 to start his career in the division for drivers ages 10-16 years old. But Madera’s Robbie Kennealy leads the championship after four rounds of competition, using a win and a pair of fast-times to earn a 12-point advantage over Qunicy, Wash.’s Kasey Kleyn. Kleyn has earned three podium finishes and no finish worse than fourth in his drive for his first win, driving the No. 88 for championship-winning Naake-Klauer Motorsports.

Colorado’s Brody Moore led wire-to-wire in the season opener and runs third in the standings. Ethan Nascimento finished a season-best second in May and is fourth in the series with Loomis’ Kenna Mitchell using a third-place in that race to move up to fifth in the standings. The 51FIFTY Jr. Late Model Series action is a 70-lap main event spread over a 40-lap segment and a 30-lap segment, with a break for adjustments and MAVTV-interview in between.

The INEX Legends Tour will make its second Madera stop of 2022 on Saturday for a 35-lap feature. Their appearance on May 14 saw 29 cars in action with second-generation driver Brendan Ruzbarsky earning victory over Sean Hingorani.

INEX Bandoleros have been growing at the speedway as well, with a new crop of the youngest drivers at the speedway looking for victories. Skyler Shoppe leads the championship over Las Vegas’ Kellen Keller. 20-laps of racing is scheduled for these drivers this weekend!

Action gets underway on Friday with practice from 5pm until 8:30pm with pit gates opening at 3pm. On Saturday, pit gates open at noon with practice at 1:45pm. Qualifying hits the track at 4:05pm. Heat races are at 5:15pm followed by opening ceremonies are at 6:00pm. All four main events will follow.