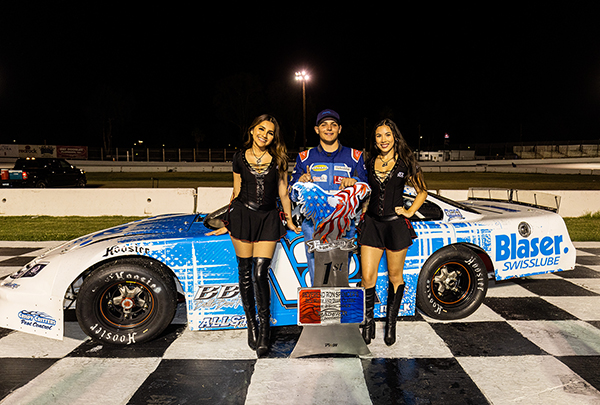 Ethan Nascimento aimed for an iron man accomplishment as he signed up for triple duty, racing in the Lunkerdaddy Pro Late Models, 51FIFTY Jr. Late Models, and INEX Legends Tour races. With 100-degree temperatures, Nascimento started his bid with fast-times in qualifying for both Late Model classes and second quickest in the Legends.

Aguirre used the outside to take the opening lap lead while the first of many two-by-two formations for the third position developed. Nascimento used the outside in a duel with Walbridge to emerge third on lap 12. Rick Thompson retired to the pits on lap 16. Aguirre paced the action running the top line while Meech tried to make hay on the bottom. Nascimento battled Meech for second before a caution flew on lap 21 for Mike Hensley spinning in turn two.

Meech and Nascimento resumed their battle on the restart, with contact into turn three. Meech slid and was tagged by Walbridge. The incident brought out the caution on lap 22 and relegated both drivers to the rear of the field.

Aguirre picked the outside of Nascimento on the following restart. Nascimento used the inside to take the lead on lap 23. The two-by-two action for third continued with Shelden Cooper winning the position for the moment. Cooper then challenged Aguirre for second. Cooper made a maneuver to the inside of Aguirre in turn three which resulted in contact exiting turn four. They collided again in turn one on lap 33, then tangled in turn three on the same lap to eventually send Aguirre spinning and require a caution. Both were sent to the rear for their involvement.

Keller had driven up to third at that point, challenging Idaho’s Jacob Smith for second. Another yellow flag waved on lap 43. Nascimento narrowly held the lead on the following restart, using a slide job to slide in front of Keller to lead lap 44. Nascimento led Keller, Bakersfield’s Seth Wise, Smith, and 2021 Jr. Late Model champion Brody Armtrout into the race break for adjustments on lap 50.

The restart saw Nascimento pick the inside of Keller. Keller predicted a move to the lead during the MAVTV interviews at the break, then did just that – charging into the top spot on the exit of turn two. Nascimento tried to drive underneath him in turn four but they touched, sending Nascimento spinning and bringing out the caution flag.

Bakersfield’s Kercie Jung had earlier surrendered an eighth-place starting position during the initial pace laps and went to the back. She overcame that to drive into a battle for fifth with Armtout. The battle ended on lap 54 with Jung going up in sparks in turn three with heavy right-side damage.

When action resumed, Walbridge had worked through the pack to rank fifth in a battle with Aguirre and Washington’s Kasey Kleyn. Nascimento eventually entered the picture again as well after driving from the rear of the field himself.

Kyle Keller grabbed the Ron Spencer Classic victory over a career-best second place for Jacob Smith with Seth Wise rounding out the podium in third. Armtrout and Walbridge rounded out the top-five. Keller will take an unofficial eight-point advantage over Walbridge into the $5,000-to-win Summer Speedfest on July 30th!

The pack lined up behind opening night winner Brody Moore of Colorado in a duel for second, but Moore held the position. Washington’s Kasey Kleyn spun Nascimento in turn three on lap nine, collecting Newport Beach’s Sean Hingorani in the process for a yellow flag.

10-year-old Vito Cancilla spun on the backstretch for the next caution on lap 27. On the restart, Loomis’ Kenna Mitchell dove inside Moore for the second position. They collided in turn one and spun up the race track, collecting Fort Bragg’s Lane Anderson and Hingorani. Hingorani and Mitchell were eliminated from the event with significant front end damage while a lengthy red flag followed

Kennealy led Nascimento, Kleyn, and rookies Joey Kennealy of Madera and Monty Tipton of Mill Valley into the lap 40 race break. Nascimento tried to take the lead on the outside on the restart, then eventually filed in line behind Kennealy on lap 43.

Kennealy and Nascimento set a strong pace, driving ahead to a sizeable advantage over Kleyn. Nascimento finally made his move in turn four to take the lead on lap 66. Kennealy attempted a crossover in turn two in lapped traffic to no avail. Ethan Nascimento won his first career 51FIFTY Jr. Late Model race over Kennealy, Kleyn, Joey Kennealy, and Brody Moore.

Robby Czub won a roller coaster of a 40-lap INEX Legends Tour race over a 16-car turnout. Czub led the first four laps before Cody Winchel had the lead on lap five. Brendan Ruzbarsky followed him into second on the outside as well.

Contact in turn two allowed Ruzbarsky to get the lead on lap 11. Winchel then used a restart to retake the lead on lap 13. A restart led to a multi-car crash and a red flag on lap 22. Madera’s Aiden Phillips got into Bakersfield’s Logan Chambers, the 2021 Bandolero track champion. The ensuing melee gathered up several other cars as well in turns one and two.

Winchel and Ruzbarsky raced hard for the lead on the restart. Contact on the exit of turn four spun Ruzbarsky, with Zach Sansom slamming the front stretch wall to avoid him. Winchel and Ruzbarsky both restarted at the back of the pack with Czub inheriting the lead. Czub led the final 18 circuits for victory with Ethan Nascimento finishing second. Reno’s Nick Halen, Ruzbarsky, and Winchel rounded out the top-five.