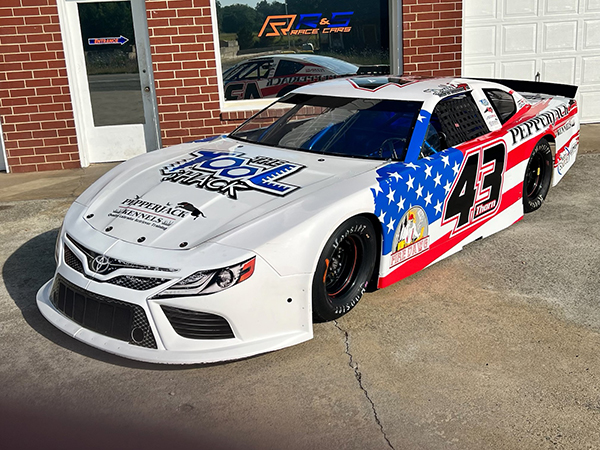 BAKERSFIELD, CALIFORNIA (June 22, 2022) – Derek Thorn, his partners, and R&S Race Cars have added an additional NASCAR Late Model Stock Car race to his schedule of marquee events across the country. Thorn will compete at South Boston Speedway on July 2nd for the prestigious Thunder Road Harley-Davidson 200. The top drivers in the NASCAR Advance Auto Parts Weekly Series will collide for a $10,000 prize.

Thorn’s major partners – led by Misty Melo of PepperJack Kennels and Colten Wright of The Tool Shack – will support Thorn in the R&S Race Cars’ No. 43 Toyota Camry carrying a special patriotic scheme for the fourth of July race weekend. Thorn will also be debuting his newest sponsor Nutri Source and its Element Series through a partnership of PepperJack Kennels. This event will be televised live on FloRacing.com

R&S Race Cars is a decorated Late Model team led by owner and veteran Crew Chief Marcus Richmond, a three-time winner of the Late Model Stock Car race in Martinsville with victories for Timothy Peters and Phillip Morris. Richmond has also been the Crew Chief for four NASCAR Camping World Truck Series wins at the Virginia half-mile as well along with numerous other top accolades in his racing career.

Just ten days after the Harley-Davidson 200 weekend, Thorn will climb aboard his Campbell Motorsports/Apel Racing Super Late Model to battle for the coveted Slinger Nationals victory in Wisconsin on July 12th.

Derek Thorn’s 2022 season is supported by: