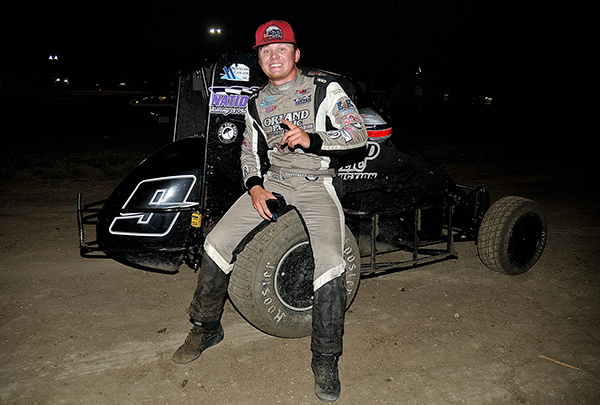 GLENDALE, ARIZ. (September 19, 2021) – Brentwood’s Blake Bower won his seventh victory of the 2021 Western Midget Racing presented by Masters Design and Construction season on Saturday night with his debut victory at Adobe Mountain Speedway in Glendale, Ariz. The win was Bower’s first trip to victory lane since July 30 at Ocean Speedway and maintains his 16-point advantage over Fresno’s David Prickett in the championship. Photo by Top Dawg Photos

Bower drove the no. 29 Boss Chassis for Cory Brown at the one-fifth mile oval in the Copper State. He took the lead from Prickett on lap five and never relinquished it for the win. Goodyear, Ariz.’s Nathan High and Brown split the heat races. Hawaiian Kala Keliinoi and Las Vegas’ Todd Hawse shared the front row for the 25-lap feature. Prickett took the lead from Keliinoi on lap three after starting fourth. Bower led Prickett, sixth-starting Brown, seventh-starting High, and Keliinoi at the conclusion of the feature.

The win gives Bower momentum heading into arguably a home race for the East Bay driver, as Western Midget Racing prepares for its debut race at Antioch Speedway at the Contra Costa County Fairgrounds. The stock production powered Midgets will add a fifth points racing venue to its calendar with the highly anticipated debut.