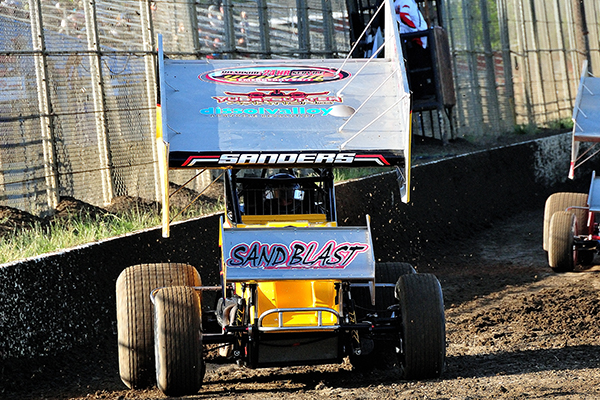 WATSONVILLE, CALIF. (June 5, 2021) – Justin Sanders won his sixth Ocean Sprints presented by Taco Bravo feature as the calendar rolled into the sixth month of the year, with the Aromas driver leading all 30-laps of the feature to extend his points lead on Friday night. Sanders’ win was part of a four-division show at the Ocean Speedway in Watsonville at the Santa Cruz County Fairgrounds. Photo by Top Dawg Photos

Salinas’ Keith Day, Jr. blitzed to a new track record in time trials with an 11.122 second lap, topping the 11.183 record previously set by Brad Furr. Sanders also timed in underneath the record and ranked second in qualifying. Both drivers were unable to grab heat race wins but qualified for the dash, where Day topped Sanders to earn the pole position for the feature.

Sanders went around the outside of Day to lead the opening lap of the 30-lap contest, then encountered lapped traffic by lap four. Day battled with Concord’s Joey Ancona and Sebastopol’s Joey Myers, Jr. for the second position with the trio rolling the top of the racetrack through traffic. Burt Foland Jr. bounced off the backstretch wall while being lapped on lap 11. The bottleneck put Myers on the binders exiting turn four with Ancona hitting him in the right rear. Myers was able to return with a new tire but Ancona did not continue.

Hanford’s Zane Blanchard passed 2019 champion James Ringo of Morgan Hill for third on the restart. Bud Kaeding had a run on the inside to potentially advance past them both, but it was nullified when Geoffrey Grimm spun in turn two on lap 17. Nick Ringo retired from the race under the caution, surrendering seventh. James Ringo went the wrong direction on the restart, falling back to eighth position. Kaeding advanced to fourth on lap 21. Day spun from second position in turn four on lap 26. Day’s race then ended when he stopped in turn four for an additional yellow on lap 27.

Sanders charged ahead of Blanchard and Kaeding on the final restart, with Blanchard edging out Kaeding for second position at the stripe. 2020 Ocean Sprints champion Mitchell Faccinto finished fourth. Hanford’s DJ Netto overcame a flip in the first heat race to advance from 16th to fifth in the feature.

A 15-car Hobby Stock field entertained in their 20-lap feature with Rob Gallaher driving from 12th on the grid to victory lane. Norm Ayers led the opening lap with Joe Gallaher and Nick Silva driving past Scott Freeman for second and third respectively. Joe Gallaher then took the lead on lap four when Ayers slowed in turn four with a flat right front tire.

Joe Gallaher picked the outside of Nick Silva, with Silva going up the inside to lead lap five. Silva was making his first start since 2017 in the division. The caution flew on lap 10 for Adriane Frost up in smoke on the backstretch. Joe Gallaher used the restart to make a three-wide pass for the lead before Terry Campion spun in turn four for a yellow flag.

Silva grabbed the lead back on the following restart, leading lap 12. Rob Gallaher took over the top spot on lap 17. Joe Gallaher dove inside Silva for second but spun to bring out a caution, setting up a sprint to the finish. Jerry Skelton tagged Silva for second, sending him spinning into hard contact with Campion in turn four. After a lengthy caution for cleanup, Rob Gallaher cruised to the win ahead of Skelton, Freeman, Sam Kennedy, and Joe Gallaher.

Camarillo’s Tommy Velasquez III won the South Bay Dwarf Car 20-lap feature, leading 19-laps of the race. Mark Biscardi led lap one before Velasquez drove past on the outside on the backstretch. A restart on lap four allowed Nick Velasquez to take over second. Brandon Wiley of Santa Maria made his first Ocean appearance in several years and rounded out the podium. Sean Catucci and Biscardi finished fourth and fifth.

DJ Keldsen dominated the Four Banger feature after firing off from the eighth and final starting position. Watsonville’s Richard Mitchell led the first two circuits before Keldsen took over. Travis VanGilder had a significant crash when he bounced off the front stretch wall and was t-boned by Mitchell. Both drivers were uninjured. Keldsen crossed the line first but was disqualified in post-race, allowing Kate Beardsley to be credited with the win over incoming points leader Tony Gullo and Nicole Beardsley.

Ocean Speedway will host the Pombo/Sargent Classic on Friday June 11 with the NARC King of the West 410 Sprint Cars. IMCA Modifieds, IMCA Sport Mods, and Western Midget Racing will also compete. Tickets are available at www.OceanSpeedway.com or at the gate.