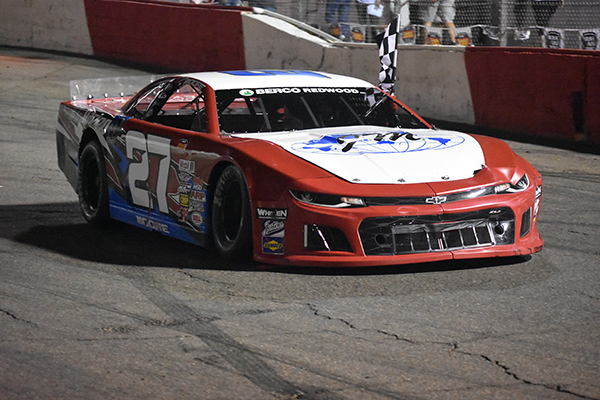 Moore’s come-from-behind victory in the second feature was among the night’s highlights.

“That whole race – it was just violent! That was a good short track race. Right out of the gate our car got hit front and rear. It started overheating and I didn’t know if we were gonna finish,” Moore said. “All of a sudden I was like ‘yep it’s good, let’s win it!’”

An opening lap skirmish during the nightcap saw the field bottled up on the outside line. Moore was hit from behind by Calvin Hegje, sending Moore spinning and heavily damaging Hegje’s machine. While the duo restarted at the back of the field, Sammy Solari led from the pole position. Loomis’ Michael Mitchell moved into second on the inside line. Kenna Mitchell and Thomas Martin collided in turn two with Martin spinning. Martin continued which allowed the race to stay under green.

Mitchell used the inside to snake into the lead from Solari on lap ten. A series of cautions followed, including mechanical trouble for 14-year-old Jake Bollman. Contact on lap 17 brought out the yellow when Matt Wendt of Galt collided with Aidan Daniels of Fort Bragg which led to Daniels spinning out.

Mitchell chose the inside of Cole Moore on the following restart and maintained the lead. Dylan Zampa went up in sparks and had contact with Cole Moore before stopping for a caution flag. John Moore charged past Cole Moore for second on the restart before cautions flew again for Kenna Mitchell sliding into turn one with sparks underneath her machine.

The decisive restart came on lap 28 when Mitchell went outside of Moore. Moore used the inside to lead lap 28 to take home the win, followed by Mitchell, Cole Moore, Mike Lovell, and Martin.

John Moore led the final 28 laps for the win in the first Berco Redwood Late Model feature of the evening as well. Moore earned the pole after a six-car inversion. The caution flew on lap five for Kylie Daniels spinning on the backstretch.

Aidan Daniels took advantage to drive around the outside to lead lap seven, but Moore fought back to lead lap eight. Matt Wendt suffered damage in a multi-car incident in turn four on lap 15 and the caution fell again on lap 24 for debris. A final caution on lap 31 saw Shannon Mansch, Martin, and Solari slicing and dicing before Mansch spun. Moore drove ahead of Aidan Daniels over the closing laps for the win, followed by Bollman, Cole Moore, and Zampa.

2020 Riebes Auto Parts Super Stock champion Andrew Peeler came out on top in the 30-lap main event. Dixon’s Tim Walters led the way as the leaders battled in a two-by-two formation in the opening laps.

Roseville’s Roy Smith moved to the outside, chipping away at the top two positions before passing both Chris Paulson and Walters to lead lap ten. Peeler moved into second on lap 13 while Walters was freight trained on the outside back to fifth.

Blake Disomma and Jeremy Fritts tangled to require a caution flag as Fritts had a tire burning spin. Smith picked the outside of Peeler for the restart, with Peeler taking over the lead on lap 22. Roseville’s Josh Whitfield followed into the second position but could not track down Peeler. Smith finished third over Eureka’s Brandon White and Walters.

Lincoln’s Brandon Frantz jumped into the top spot on lap four. Cockrum stayed in pursuit, retaking the lead on lap nine in lapped traffic. 2020 champion Ray Molina of Roseville grabbed second from Frantz before Frantz took it back on lap 11. Frantz drove within a car length of Cockrum on lap 21, but Cockrum held on for the win. Frantz, Molina, Matthew Fuhs, and Mario Novelli followed Cockrum at the finish.

Eric Price, Jr. led all 30-laps for his fourth Jaws Gear & Axle Modified win of the season. 2020 champion Jason Philpot advanced to second by lap five and restarted inside Price after a yellow on lap 15. Price held court for the win over Philpot, Ralph Bailey of Colfax, Sammy Nuno of Windsor, and Tyler Mullican of Roseville.

Evan Laires became the first Bandolero to earn a win at All American Speedway in 2021, earning the win in the 20-lap event. The tumultuous race ended one lap early with Linden’s Laires leading the Mini Cups of 2020 champion Bella Thomsen and points leader Colton Nelson at the finish.

The JM Environmental Wild West Shootout is up next at All American Speedway on Saturday May 22. The SPEARS SRL Southwest Tour will race for 147 laps, joined by a 75-lap SPEARS Pro Late Model race and a 75-lap Spears Manufacturing Modified contest. Tickets are on sale now at www.AllAmericanSpeedway.com Gates open at 4pm with racing at 5pm.