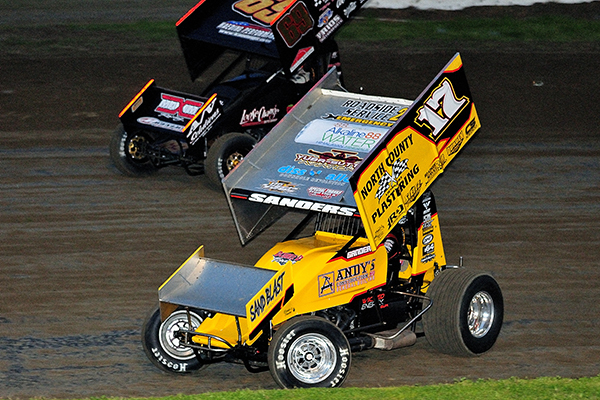 WATSONVILLE, CALIF. (April 17, 2021) – Justin Sanders outfoxed Shane Golobic through lapped traffic, winning a battle of former Ocean Sprints presented by Taco Bravo champions for his third win of the year in the fourth round of the 360 Sprint Car series. Sanders narrowly topped Golobic at the stripe at the conclusion of the 30-lap feature in Watsonville.

“Yeah it was tough. Our gearing was kind of off for these race track conditions,” Sanders said. “I actually made a lot of mistakes through lapped traffic. Kind of got lucky a couple times and was able to get it done.”

Hanford’s Mitchell Faccinto won the pole after winning the dash. Faccinto won the feature hole shot into turn one over Sanders, leading the first five laps of the race comfortably. Business picked up in lapped traffic on lap six, with Sanders and Golobic going past Faccinto in three-wide action. Sanders banged wheels with the lapped car of Grant Champlin who stopped two laps later to force a caution on lap 11.

Corey Day went upstairs on the restart to charge into third by lap 14 while Sanders continued to pace Golobic. Golobic clawed towards Sanders on lap 22 with the pair going side-by-side briefly in turn two. Ryon Nelson flipped on the front stretch on the following lap with DJ Netto retiring to the pits as well.

Sanders got mixed up in traffic as he completed lap 28, then went outside of traffic to sweep past them to take the white flag. Golobic had a tremendous run on the bottom through both turn one and turn three, knifing underneath Sanders and a lapped car for the thrilling finish. Sanders won by just a nose over Golobic. Faccinto came back to finish third ahead of Corey Day and Keith Day, Jr. Golobic led the 29-car field in qualifying while 16-year-old Bryce Eames of Santa Maria won the B-Main.

Fresno’s David Prickett won his 13th career Western Midget Racing presented by Masters Design and Construction feature on Friday night. Prickett shared the front row with Brentwood’s Blake Bower, with Bower pulling ahead from the outside pole to lead lap one. Antonia Boscacci of Mountain View rode over the right rear of Shawn Arriaga of Antioch for a minor tumble, requiring a red flag on lap four.

Bower’s car stopped on the following restart, allowing Prickett to move into the lead. Incoming points leader Megan Moorhead and Cameron Beard had contact into turn one on the restart with Moorhead dropping out of the race a few laps later. Bower came back through the field to challenge Arriaga for second. Bower tagged the berm inside turn one twice, with the second collision sending him airborne for a lap 15 caution.

San Jose’s Shawn Jones won an exciting 20-lap feature for the South Bay Dwarf Cars. Gage Cheek of Santa Clarita led lap one before Tommy Velasquez III of Camarillo led lap two. The leaders darted in and out of lapped traffic with Jones in hot pursuit of Velasquez. After they went four-wide in traffic on lap 13 in turn two, Jones pulled ahead to lead lap 14. Nick Velasquez finished third over Travis Day of Concord and Trafton Chandler of Carmel Valley.