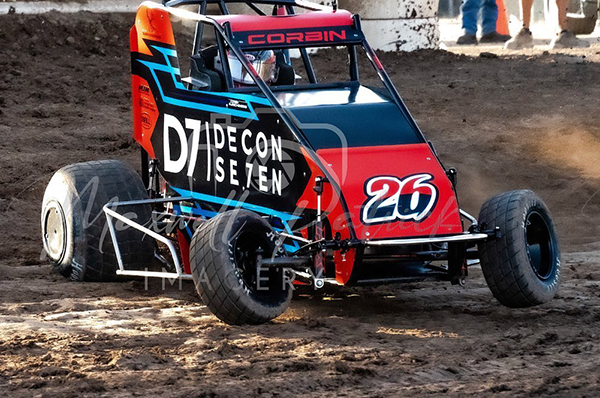 MESA, ARIZONA (April 9, 2021) – Due to weather forecasts affecting the NOW600 race at Sweet Springs in Missouri, Corbin Rueschenberg will instead throw his hat into the ring at Port City Raceway in Oklahoma. The driver of the #26 Driven Performance Chassis for JPU Racing will compete in the Non-Wing Outlaw division, serving as the undercard for the USAC National Midgets on Friday and Saturday. Photo by Maxwell Patrick Imagery.

Rueschenberg competed in stock Non-Wing and Restricted at Port City Raceway in March, scoring a second-place finish in the Restricted feature. The Mesa, Arizona driver will utilize his stock power plant in this weekend’s Outlaw competition but hopes to make a big impression in the FloRacing.com televised event.

He is coming off a successful weekend in his home state at last weekend’s Todd Damron Memorial at Adobe Mountain Speedway in Glendale, Ariz. He led Friday Non-Wing qualifying over a 35-car turnout and finished ninth in the feature. On Saturday the event competed with wings on and Rueschenberg earned a solid third place effort to round out an all-Driven Chassis podium.