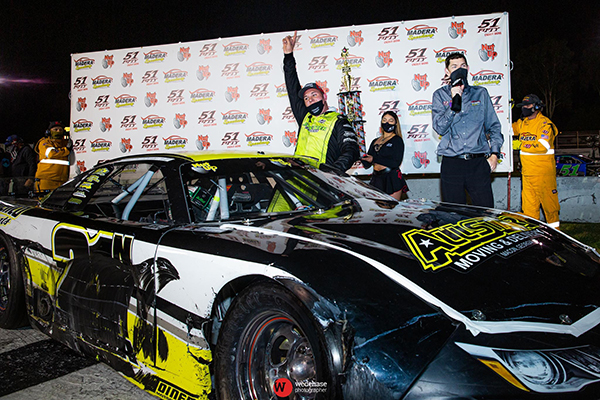 The event marked the first in 18 months with fans in attendance as well at the one-third mile speedway.

“It was tough. I apologize to (Herzog) for running him hard a little. With (Huddleston) I just ran him the way he ran me,” Nascimento said. “These guys here put in so many hours at the shop and so many hours at the track for free. I learned from Eric Holmes, my uncle Mike, and my dad. This is the car Holmes ran and won two Short Track Shootouts. If it wasn’t for him and all these guys I wouldn’t be where I’m at.”

Nascimento started on the pole position with fast-time qualifier Herzog advancing from sixth to fourth quickly at the start while Huddleston moved up from tenth to fifth by lap 16. Napa’s Dylan Zampa and Howard Holden of Clovis spun in turn one for a caution on lap 17 while racing for tenth. Third starting Jason Aguirre used the outside line to move past Nascimento for the lead on the restart with Herzog sticking his nose inside Nascimento for second by lap 23. Colorado’s Cassidy Hinds hit the turn four wall head on requiring a red flag stoppage on lap 24. Hinds was uninjured.

A two-by-two duel for the top spot ensued on the following restart when Aguirre, Nascimento, Herzog, and Huddleston stayed under a blanket for numerous laps. The thrilling battling saw Nascimento take over the top spot by a nose on lap 28 before Aguirre led lap 30. A caution on lap 31 for Holden in turn four set up another restart.

Aguirre picked the inside, allowing Nascimento to sweep past to lead lap 32. Three-wide racing ensued for second behind Nascimento. Aguirre worked Huddleston up the hill on several occasions, allowing Herzog to peek his nose inside. Both Huddleston and Herzog eventually moved ahead of Aguirre.

Huddleston then reeled in Nascimento for the lead by lap 41. Nascimento persevered before a lap 48 caution drew the scheduled lap 50 break two laps early. Nascimento led Huddleston, Herzog, Aguirre, and Las Vegas’ Kyle Keller as the top-five at the break.

When racing resumed, Nascimento picked the outside line and Huddleston capitalized to lead lap 49. They raced side-by-side for the lead through lap 56 before Nascimento cleared Huddleston. Huddleston then dove back underneath on lap 58, eventually getting the lead coming to a caution on lap 61. The caution reverted the field back a lap, handing the position back to Nascimento.

Nascimento had a strong restart on the top, leaving Huddleston to fight with Herzog for second. A caution on lap 64 gave Huddleston another shot, which he took advantage of to lead lap 65.

Herzog and Nascimento had a furious battle for second with heavy contact in turn four on lap 73. Behind them, Colby Potts and Aguirre tangled causing a spin for Aguirre and a caution flag. With seven to go, Huddleston restarted outside of Nascimento in the shootout for the win. Nascimento worked Huddleston up the race track, knocking him back to fifth with Nascimento driving ahead for the lead.

Shelden Cooper spun on the next lap and Huddleston chose to retaliate on Nascimento under caution. Huddleston was parked into the infield by officials while Nascimento kept his place at the front.

Nascimento defended a run up the inside by Herzog on the final turn to take the checkered flag for his first Nut Up Pro Late Model win. Zampa returned to the frame in the closing laps with a strong third place finish followed by Jay Juleson and 2020 51FIFTY Jr. Late Model champion Bradley Erickson of Phoenix in fifth. Adam Lemke of Hollister rounded out a top-six of all-Jr. Late Model graduates.

Outside pole sitter Barrett Polhemus spun on the opening lap in turn four but the field managed to avoid him. Third row starters Kercie Jung of Bakersfield – the fast-qualifier – and Colorado’s Holly Clark immediately jumped up to second and third respectively on the restart. A multi-car tangle on lap 12 included Loomis’ Kenna Mitchell, relegating her to several laps down after repairs.

A caution on lap 20 set up a wild sequence for second position on the restart. Jung and Brody Moore made contact and the field went four-wide. Jung and Ethan Nascimento slid into each other down the backstretch. The race remained green, however. A significant crash on lap 27 brought out the red flag when Jeffrey Erickson and Kylie Ith collided in turn four. Ith then shot up the race track after contact from Robbie Kennealy, sending her into the path of opening night winner Kale McClenny. McClenny ended up lodged against Ith’s driver’s door opening, but all drivers were uninjured.

Clark and Moore tangled on a lap 33 restart in jockeying for positioning on the bottom of the race track, with Nascimento hitting the spinning Clark. To start the second half, Clark spun from the fifth position and then a few laps later, Erickson spun from fifth as the position cursed several drivers.

Kercie Jung ran down Smith for the lead, using a bump to get inside of him on lap 59. Jung spun entering turn three, costing her a shot at the top position. The last caution on lap 68 set up a green-white-checkered finish where Smith topped Polhemus, Moore, Brody Armtrout, and Erickson at the finish.

For information about Madera Speedway, visit www.RaceMadera.com The 2021 season would not be possible without the support of Nut Up Industries, 51FIFTY LTM, Mission Foods, 805 Beer, Race 2B Drug Free, Competition Carburetion, Hoosier Tires, and Sunoco Race Fuel. 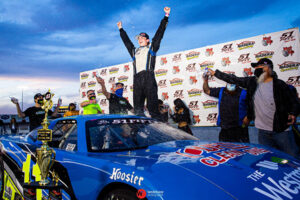