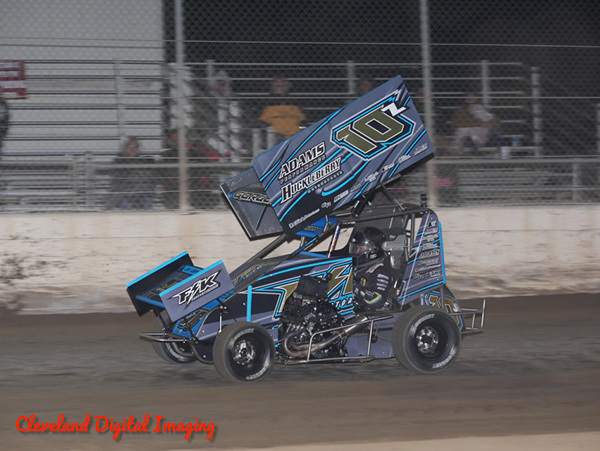 Gorden qualified fourth with a 9.796 lap around the speedway, then finished fourth in his heat race. He started on the pole for the feature event and led all the way, leading wire-to-wire for the $500 victory. Gorden also participated in the Non-Wing division where he did not transfer from the B-Main but gained additional experience against a 42-car turnout.

“Jerrod (Huckleberry) and “Shaggy” had the car set up perfectly all night, can’t complain. Got fourth in heat and got to start on the pole. Track was right around the bottom so it worked out in our favor,” Gorden said. “(Ten-J) is unmatched. They help me with driving, changes to the car. Anything I need they do it.”

He also participated in Friday’s action at Keller Auto Raceway Plaza Park. A successful showing at the renowned facility in Visalia saw Gorden run seventh in Super 600 time trials before winning the first heat race from the pole. Starting on the pole for the feature, he ultimately finished third. He was one of the hard chargers of the night on the Non-Wing side as well, overcoming a 17th starting position in the feature to finish fifth.

Gorden has picked up multiple top-ten finishes across Plaza Park, Lemoore, and Delta to open up his Micro Sprint career. The 15-year-old has grown accustomed to being one of the youngest drivers in whichever series he attempts and that trend will continue this weekend at Silver Dollar Speedway in Chico. Gorden will join Tiner Hirst Enterprise for the 360 Sprint Car competition with two-days of action including the Bill Brownell Memorial and the Sprint Car Challenge Tour David Tarter Memorial. Saturday’s races can be viewed live on Flo Racing.