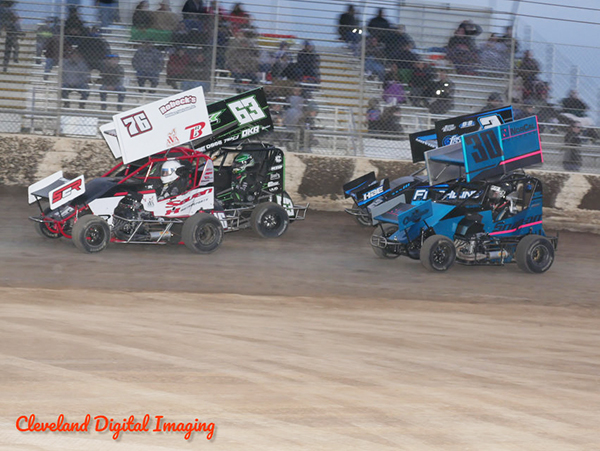 STOCKTON, CALIFORNIA (April 29, 2021) – The second consecutive weekend of Micro Sprint action in Stockton sees the third points race for Delta Speedway presented by Financial Center Credit Union on Saturday night. After entertaining the fans with over 100 entries last weekend, the Micro Sprint drivers at the 1/7th mile dirt oval are preparing for another evening of action. Drivers compete in Super 600, Non-Wing, Restricted, and Jr. Sprints for $1000-to-win track championships. Photo by Chris Cleveland

Up to 250 spectators are permitted in the grandstands with ticket sales taking place online at: tinyurl.com/2021deltatickets on MyRacePass and can also be found at www.DeltaSpeedwayStockton.com Tickets are $10 for adults ages 13 and up, $5 for kids ages 6 to 12, seniors 55+, and military, and kids 5 and under are free! Pit Passes can also be pre-purchased by competitors for $20 or purchased at the gate.

Joe W. Lewis Snap-On Tools is offering a new bonus prize for the Non-Wing competitors this weekend with the “Snap-On Performance” double. Six drivers will be eligible – the top-three in Non-Wing points entering the night along with the top-three qualifiers on Saturday. If any of those drivers can win both their heat race and the main event, they will double their purse for a $1000 prize.

14-year-old drivers Ashton Torgerson of Medford, Ore. and Clovis’ Jade Avedisian are the Non-Wing winners in 2021. 2019 & 2020 defending champion Caden Sarale of Stockton leads the wingless warriors in the points on the strength of a third-place finish and a fourth-place finish. Visalia’s Brian Gilbert, Valley Springs’ Dan Mognaga, Tracy’s Brandon Riveira, and Medford’s Austin Torgerson are the top-five in the championship. 30-laps of feature racing is on tap this weekend.

Super 600 is competing for the Cox Racing prize at the end of the season, where the championship driver will earn a test day and a race day in the #31C 360 Sprint Car fielded by Cox Racing, Justyn Cox, and Rod Tiner. Clovis’ Dominic Gorden used his first-career victory in Super 600 last weekend to take a scant one-point advantage over 2019 & 2020 champion Sarale in the points. 2014 champion Travis Labat of Livermore, Devon Courtnier, and Austin Torgerson make up the top-five in the standings. Jake Hagopian won the opening round and ranks sixth. Super 600 will compete for 30-laps and $500-to-win.

Drivers from all over the West Coast are contending at the top of the Restricted championship, but it is Sacramento’s Austin Wood leading the way while still looking for a victory in 2021. Wood leads Stanwood, WA’s Dominic Carter by four markers. Carter won the opening night before finishing third in round two. Fresno’s Colton Key, round two winner Taylor Mayhew of Bakersfield, and Fresno’s Reilee Phillips are in hot pursuit of the points lead as well. Restricted competes in a 25-lap feature each week for no less than $300-to-win.

Brody Rubio and Blayden Graham have split the Restricted wins, with Manteca’s Rubio leading Bakersfield’s Graham by five points in the championship. Hayden Stepps of Oakdale, third-generation rookie Levi Osborne of Milbrae, and Mavrick Pedroni of Jamestown are the top-five in the points tally. 20-laps and a minimum of $200-to-win await the youngest racers at Delta Speedway.

Saturday’s race is the final chance for drivers to purchase a membership to run for the points championships.