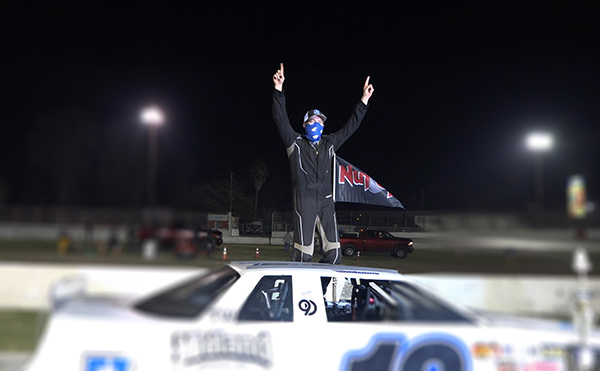 MADERA, Calif. (August 30, 2020) – The inaugural Olga’s California Dream 100 for Pro Mini Stocks saw a vision fullfilled with a fast-paced feature filmed for MAVTV. A blistering 100 laps later, with just one caution flag, Sammamish, Wash.’s Thomas Stanford was victorious with a $2,000 check for his efforts.

“Two grand is a lot for a Mini Stock driver and this is a big deal. It’s really cool to win the inaugural one and I hope they keep doing it because we want to come back,” Stanford said. “My father in law keeps all the trophies and has a trophy case. He might need a bigger one for this.”

Stanford led practice and qualifying on the one-third mile oval against a varitety of four cylinder machines. Drivers from Washington, Idaho, Southern California, Northern California, Utah, and Colorado were among those in the field. A 13 car inversion allowed Nampa, ID’s Drew Crenshaw to lead the event from the pole position. Terry Armstrong, Jr. of Spokane Valley, Wash. took over the lead on lap ten after starting 11th.

Armstrong faltered with mechanical issues, handing the top spot to Washington’s Rick Ackerman, Jr. on lap 21. Ackerman paced a closely wound three car lead pack with Pasco, Wash.’s Brad Rhoades and Stanford in pursuit. The trio of Washington-based Ford Mustangs darted in and out of lapped traffic with Stanford grabbing second on lap 34, then challenging for the lead.

Stanford went around the outside of Ackerman to lead lap 42 and led the field into the scheduled lap-50 break. After a caution-free opening half of the event, drivers had a chance for adjustments and MAVTV-interviews before action continued.

The solo caution of the event flew on the restart when Gary Klinetobe spun on the front stretch. Stanford managed to charge ahead for the victory while Rhoades and Southern California driver Andy Brown dueled for third. Rhoades drove away then challenged Ackerman for second in the closing stages.

Ackerman won $1000 for his second place effort ahead of Rhoades, Brown, and Utah’s Justin Carson in a front-wheel-drive Acura rounded out the top-five.

“Olga’s California Dream 100 is one of my favorite events we have hosted,” Madera Speedway promoter Kenny Shepherd said. “Bob Coply and the teams are among the nicest people we have ever met and they worked hard to make this event happen. I’m proud that we will show off their high caliber brand of racing nationwide on Madera Racing on MAVTV.”

In other action on Saturday night, 51FIFTY Jr. Late Model drivers put their stamp on the night’s competition. 14-year-old Kabe McClenny of Bakersfield made his first start in the Madera Late Model division and promptly won his first feature at the speedway.

McClenny competes in the Jr. Late Model Series on MAVTV and is still searching for his first win in that series. The televised action continues this weekend with round six out of the nine scheduled. McClenny ranks seventh in that championship.

Kabe McClenny started on the pole alongside NASCAR Southwest Tour veteran Thomas Martin, who ran double duty with the Challenge Cup Series as well. Martin kept things close with McClenny throughout the 40-lap feature, but McClenny led all the way for his first win in his four seasons with Madera.
Martin topped rookie Hans Beeler for his career-best finish in third as well. Fresh off a top-five with the televised Nut Up Pro Late Models, Shelden Cooper finished fourth ahead of Pacific Challenge Series champion Mike Beeler. McClenny led time trials then won his heat race as well.

With a lone podium finish in the 51FIFTY Jr. Late Model Series’ inaugural season in 2016, Las Vegas’ Kyle Keller had been well overdue for a checkered flag in Madera. They say the first win is the hardest to get out of the way, and Keller is proof. After winning his first Madera Late Model feature on August 1st, Keller then won Saturday’s 50-lap race for the Challenge Cup Series.

The large Grand National style cars returned to the track with Keller starting inside Martin at the start. Martin went around the outside of Keller to lead the opening lap. Keller steered the Jerry Pitts Racing Ford to the inside of the John Krebs-owned Chevrolet of Martin on several occassions. Keller finally worked his way underneath Martin to take the lead on lap 15.

Multi-time Perris champion Chuck Becker spun for the lone caution of the event, but continued on. Keller topped Martin, a veteran of 34 NASCAR West Series starts, by 3.554 seconds at the stripe. Another 51FIFTY Jr. Late Model driver Jesse Burks, who has a checkered flag at Madera this year in an exhibition race, rounded out the podium in third. The Charlie Wilson prepared #15 of Vince Little finished fourth with Becker rounding out the top-five.

The Central Valley Mini Stocks returned to Madera for a 35-lap feature with Joe Flowers of Manteca earning the win. Flowers went to to work from the ninth position while Ryan Doglione won an early battle with Steven Brown for the lead. Flowers and Doglione went three-wide in lapped traffic with Flowers taking the top position on lap 19.

Flowers led Doglione and Brown as the top-three finishers. Rod Baronian won a side-by-side battle with Selma’s Greg Baronian for fourth at the finish as well.

Madera Speedway continues this weekend with the Nut Up Pro Late Models, 51FIFTY Jr. Late Models, and Mini Cups vs. Bandoleros to be streamed live and televised for a later broadcast on MAVTV.