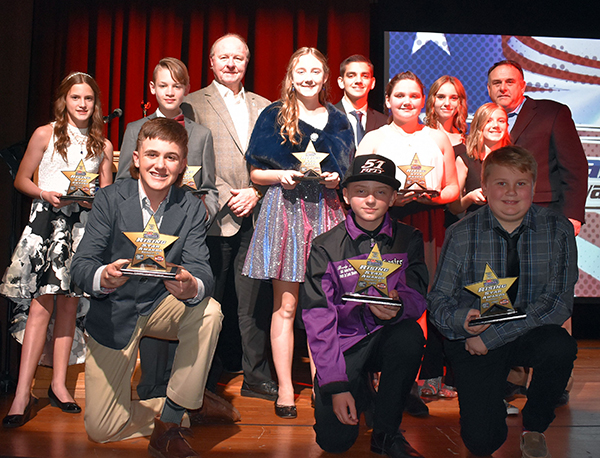 ROSEVILLE, Calif. (January 24, 2020) – All American Speedway powered by Roseville Toyota celebrated its 2019 season on Saturday night with the Championship Awards Gala, held inside Johnson Hall @the Grounds in Roseville. An outstanding turnout of over 250 drivers, families, sponsors, officials, and race fans were on hand for more than 60 awards. Daytona 500 champion Crew Chief and NASCAR on Fox broadcaster Larry McReynolds was the Master of Ceremonies.

The gala was the culmination of the first full season of promotion of the speedway by Bill McAnally Racing Promotions, under the NASCAR Home Tracks banner.

“The energy at Saturday’s event was overwhelming,” McAnally said. “It was rewarding to see everyone enjoying themselves with this type of banquet. We will continue to make All American Speedway the place our local racers deserve.”

The inaugural Ron Layton Dedication to Racing award went to Steve & Barbara Fensler, longtime supporters of Northern California short track racing and current officials at the speedway. The award was named in recognition of Layton, a former starter at the speedway. Members of his family were in attendance for the festivities as well. 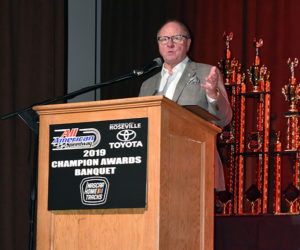 A pair of Sportsman of the Year winners were named, with track champions Peeler and Molina earning the honors. Rookie of the Year titles were awarded to Ralph Bailey, Kolby Juarez, Billy Ray, and Trey Daniels. Track record holders also received plaques for their accomplishments.

All American Speedway revealed the inaugural Above & Beyond awards, presented to local first responders who were nominated for outstanding contributions to the community. Firefighter/Paramedic Angel Mota of the City of Roseville Fire Department, Roseville Police Officer Nick Gaines, and Placer County Sheriff’s Deputy Robert Bliss were recognized by the speedway.

Each driver in attendance under 18 was awarded a special Rising Stars trophy, with ten drivers across three divisions accepting for a group photo. All six track champions were presented with signed Richard Childress Winery bottles as well. Drivers under-age were joined by a parent on stage for the presentation.

Promoter Bill McAnally continued his commitment to the community, with support from race fans and sponsors in 2019, with fundraising for both the Placer Breast Cancer Foundation and the California Peace Officer’s Memorial Foundation. Presentations were made to each non-profit during the banquet.

All American Speedway’s 2020 season begins on April 11th, with a full slate of NASCAR excitement along with the first of five Riebes Auto Parts Trailer Bashes of the year. Special events this season include ARCA Menards Series West, UTV Racing, SPEARS SRL Southwest Tour, Enduros, and the Malicious Monster Truck Tour. Season tickets are on sale now for a discounted price of $199, available Monday-Friday at BMR NAPA AutoCare on Riverside Blvd in Roseville.