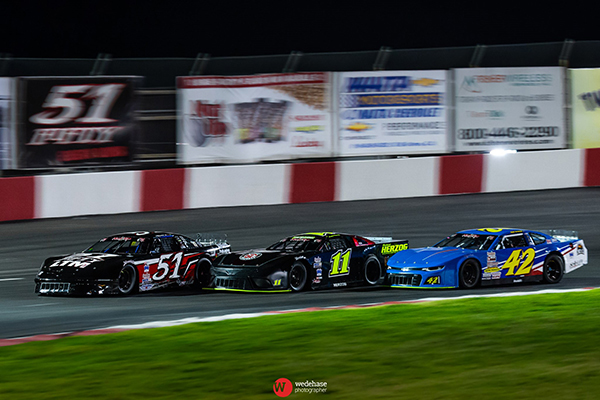 MADERA, CALIFORNIA (July 23, 2019) – Madera Speedway is raising the stakes and turning up the heat this weekend with the $5,000 Summer Speedfest 100 for the MAVTV-televised Nut Up Pro Late Models. The prestigious event is expected to attract a healthy field of drivers battling on the one-third mile asphalt oval. They will be joined by the sixth round of the 2019 51FIFTY Jr. Late Model Series plus Modified Super Toyotas and Mini Cups vs. Bandoleros.

Bakersfield’s Buddy Shepherd will be aiming for his third consecutive Speedfest victory. He topped a 27-car turnout in 2018 and a 30 car turnout in 2017. The top three finishers of 2018 – Shepherd, Austin Herzog, and Matt Erickson – are among the favorites for Saturday’s running of the midsummer classic.

Herzog, age 16, has had a strong season in the Pro Late Models after graduating from a successful Jr. Late Model career in 2017. Herzog earned his first Nut Up victory on April 6th and has added three wins in the non-televised Madera Late Model division as well. He also has a fast-time on April 27th and a recent third place finish in the Ron Spencer Classic on June 29th. That finish came behind his cousin Tyler Herzog, who used a career-best second place finish to move up to seventh in the standings.

Madera’s own Joey Iest leads the 51FIFTY Jr. Late Model standings on the strength of his second victory during the Ron Spencer Classic. Bakersfield’s Seth Wise has continued an impressive rookie season, nearly driving his family-owned car to victory in that event. Wise ranks just 27 points behind Iest in the championship. Jay Juleson has advanced to third in the standings ahead of Bakersfield’s Kabe McClenny and rookie Jake Bollman.

Bakersfield’s Kercie Jung leads the three female drivers at the track just outside the top-five. The Jr. Late Model event on Saturday night will be 70 laps with a 40-lap opening segment followed by a 30 lap conclusion.

2018 Bandolero champion Riley Massey earned her first victory of the season in June and leads rookie Dylan Baptista by just seven points. Round #1 winner Ethan Nascimento is third. Rookie Joey Kennealy leads the Mini Cup portion of the standings in the race within a race series. The youngest drivers at Madera will race for 20 laps on Saturday night.

Ryan Reynolds finds himself atop the Modified Super Toyotas by just eight points ahead of Shaun Reynolds after nine rounds of competition. Ryan has four wins to Shaun’s two, while Kyle Labrie has two wins and former champ Bert Stephens has one victory.

Saturday’s program begins with pit gates opening at 11:00 a.m. Practices run from 12:25 p.m. – 1:55 p.m. with qualifying and heat races to follow. A B Main event is planned for the Nut Up Pro Late Models at 5 p.m. followed by the Mini Cup vs. Bandolero feature. Opening ceremonies are slated for 6:05 p.m.

Madera Racing on MAVTV airs Thursdays every week. The show airs at 5 p.m. and 8 p.m. PST and is also available on the Lucas Oil Racing TV app. The third round of the 2019 Nut Up Pro Late Model Series airs on August 1st.