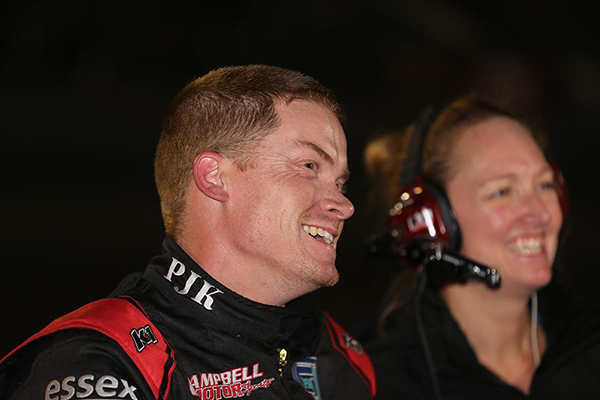 BAKERSFIELD, CALIFORNIA (January 13, 2022) – Campbell Motorsports, Derek Thorn, and his primary partners including PepperJack Kennels, The Tool Shack, and Power Grade Inc. have announced a major event schedule across the country for the 2022 season. Thorn will compete in at least six marquee events with ten total starts, across Super and Pro Late Models, planned aboard No.43 PepperJack Kennels/The Tool Shack Toyotas for Byron and Carol Campbell.

“When we discussed with the team and team owner Byron Campbell what everyone wanted to do in 2022 it became apparent quickly that we wanted to go racing more back east in 2022. I think the Campbell group, Derek and his fans deserve the year we are all planning,” said Misty Melo of PepperJack Kennels.

Thorn’s races will be broadcast live on Speed51 TV on Racing America and on SPEARS Racing TV on SPEED SPORT TV.

The campaign opens on February 5th with the All-Star Showdown at Irwindale Speedway in California where Thorn will look for the $25,000 triumph in the 200-lap contest. The 2021 All-Star Showdown was the only SPEARS SRL Southwest Tour event that Thorn did not win in 2021, leading 33 laps before ultimately finishing 26th after a parts failure.

A new event on April 8th and 9th will bring Thorn back to Five Flags Speedway in Pensacola, Florida to race in the growing Southern Super Series, Super Late Model competition which will pay $10,000 to win each night with a bonus if a driver can sweep the weekend being put up by PepperJack Kennels owner Misty Melo.

The travels east continue August 10 with the $30,000-to-win Battle at Berlin at Berlin Raceway in Marne, Michigan. It will be Thorn’s first trip to the uniquely shaped oval in over 10 years and is sure to draw most of the top talented drivers in the country.

Thorn has unfinished business when he returns in his Pro Late and Super Late Model in the All-American 400 at Nashville Fairgrounds in Tennessee on October 29th. He led a race-best 202 laps in 2020, with over 350 career laps led, before being involved in a late race incident that took him out of contention.

The exciting schedule of marquee races concludes with the biggest short track race of the year at the famed Five Flags Speedway in the Snowflake 100 and 55th Snowball Derby, December 3rd and 4th. Thorn will defend his Snowflake 100 title and continue his march towards the Snowball Derby victory and the Tom Dawson trophy.

“This will be an exciting year for everyone involved. I can’t thank the Campbell Family enough for all the years they have given me the chance to race in a great program and all my sponsors that support us – and a thank you to all my fans!,” Thorn said.

Partnership packages are still available to join Campbell Motorsports for businesses of all sizes, to partner with one of the most decorated teams and driver within asphalt short-track racing, please contact Marty Melo at (530) 941-5642.

Campbell Motorsports and Derek Thorn are supported by: