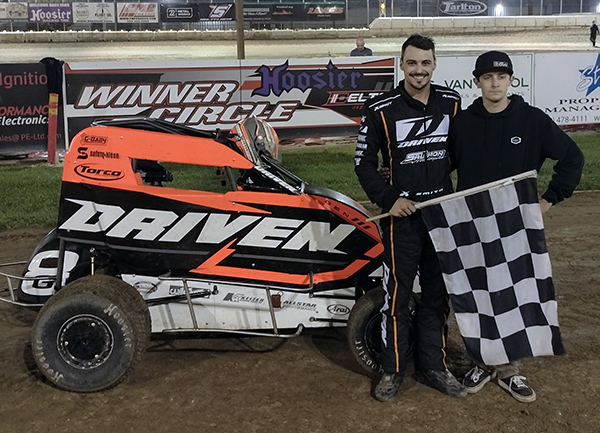 Super 600, Non-Wing, and Restricted raced in 10-lap heat races and 12-lap qualifier races while Jr. Sprints heats were eight laps and qualifiers were 10-laps. Clovis’ Jade Avedisian and Brentwood’s Jeffrey Pahule qualified for the pole shuffles in both Super 600 and Non-Wing. Avedisian was the high-point earner in Super 600 with drives from ninth to third in the heat race and a qualifier win from the fourth starting position. Colton Jones drove sixth to second in his heat race and fourth to second in the third qualifier for the highest points earning performance in Non-Wing.

After qualifiers concluded, Avedisian drew an eight out of a trick-or-treat bag which indicated that the top-eight Super 600 drivers would battle in the Pole Shuffle. Jones drew a four to set the participants for the Non-Wing shuffle. Neither high-point driver would prevail in the shuffles.

Caden Sarale ranked fourth in Super 600 Turkey Bowl points but the eight-time track champion advanced past New South Wales’ Lachlan Caunt and Fresno’s Jake Hagopian to make the shuffle final. Sarale then defeated Avedisian in the final round of the shuffle to earn the pole position for the $2,000-to-win, 40-lap Super 600 feature on Saturday. Tj Smith of Fresno defeated Jones for the Non-Wing pole shuffle triumph, earning the pole for the 40-lap, $2,000-to-win affair.

Restricted’s top-ten drivers after qualifiers competed in a 20-lap Knock Out race to determine the feature starting lineup. High point driver Teagan Moles led after the second segment on lap 10. Lucas Johnson grabbed the lead on the following restart. After lap 15, the event was narrowed down to four cars who then redrew for their positions heading into the final five lap segment. The order was unchanged after the draw, however. Johnson held the lead for the 20-lap victory to earn Saturday’s pole position for the $1,000 to win feature. 2021 track champion Jett Barnes of Visalia will start on the outside pole with Moles finishing third for the third starting position.

The top-four points earning drivers in Jr. Sprints participated in a game of Pumpkin Bowling for their feature starting positions. Braxon Vasconcellos won bowling for the Turkey Bowl pole and will be followed by Oakdale’s Hayden Stepps, 2021 track champion Brody Rubio of Manteca, and Bakersfield’s Blayden Graham in the 30-lap race which pays $1,000 to the winner.

Saturday action gets underway with drivers meeting at 4:30pm followed by B-Main hot laps. 15-lap B-Mains for Restricted, Non-Wing, and Super 600 will follow. A-Main drivers will hot lap before their features. Jr. Sprints will battle for 30-laps, Restricted for 35-laps, and 40-laps each for Non-Wing and Super 600 to crown champions of Turkey Bowl XXII.