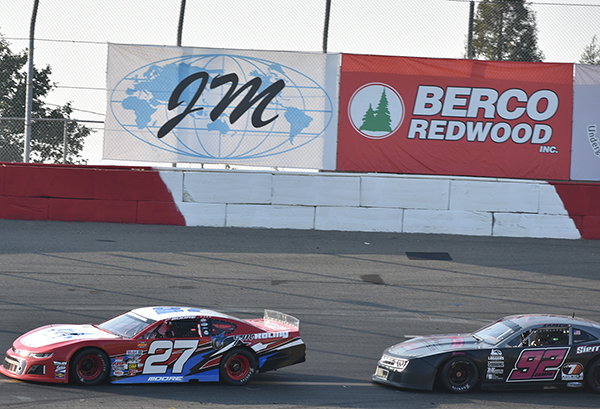 ROSEVILLE, Calif. (August 19, 2021) – All American Speedway presented by Roseville Toyota has announced the JM Environmental “Saturday Night Fever 100” for Berco Redwood Late Models on August 28, paying out over $5,000 in bonus cash on top of posted awards across a pair of twin 50-lap features. Each twin race winner will earn no less than $2,000 along with $100 added to each main event starter’s final payout at the end of the night as well. The Gunslinger Sprint Cars will aim to break the speedway track record and BCRA Vintage Midgets will be showcased. Photo by Don Thompson

Grandstands open at 5pm followed by heat races. Opening ceremonies will be at 6pm with main events to follow. Tickets for JM Environmental “Saturday Night Fever 100” are available online only at www.AllAmericanSpeedway.com All seats are general admission, priced at $20 except for kids five and under who are free.

The winged Gunslinger Sprint Cars aim to break the track record mark set by Kody Swanson in official USAC Western Sprint Car competition on May 30, 2009 at 12.180 seconds around the one-third mile speedway. They will stage a qualifying session following the NASCAR heat races along with a 15-lap feature to close the show. BCRA Vintage Midgets will heat race and compete in a 12-lap main event as well.

Points leaders at All American Speedway include Eric Price in the Jaws Modifieds, Josh Whitfield in the Riebes Super Stocks, Ray Molina in the F4s, Kenna Mitchell in the Jr. Late Models, and Colton Nelson in Mini Cup/Bando.

Additional information on fan attendance is available at www.AllAmericanSpeedway.com Competitors will participate in practice activities on Friday before racing on Saturday. Grandstands open at 5pm. Heat races and the track record attempt are scheduled for 5:15pm. Opening ceremonies will take place at 6:00pm with features to follow. Races will also be available on Pay-Per-View at www.AllAmericanSpeedway.TV