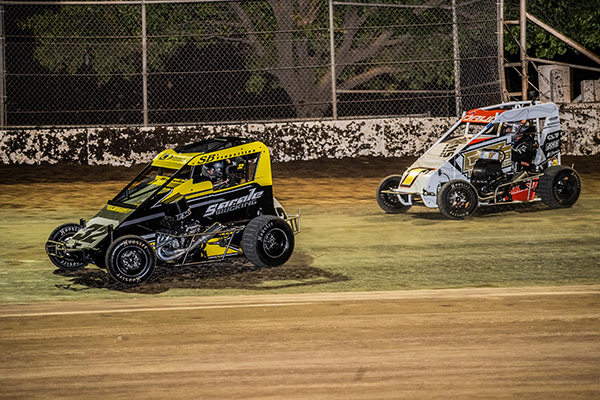 Nikko Panella’s points lead in Super 600 has grown to six points ahead of Stockton’s Caden Sarale, who won both the 2019 and 2020 championships. Livermore’s Travis Labat is third in the standings followed by July 10 winner Caeden Steele of Fresno in fourth. Medford, Ore.’s Austin Torgerson is 36-points out of the championship lead in fifth. A 30-lap feature for $500-to-win is on tap for the winged warriors of the Super 600 division.

Sarale remains the top dog in Non-Wing with a 42-point cushion over Austin Torgerson. 2020 Restricted track champion Brandon Riveira of Tracy is third followed by Cameron Paul of Springsville and Fresno’s TJ Smith. Smith claimed victory in the July 10 feature and will aim for a two-in-a-row in Saturday’s 30-lap race for $500 to win.

Fresno’s Colton Key shares a common trait with Panella and Sarale, as all three points leaders each have a single win on the season and have used consistency to lead their campaigns. Key leads the Restricted championship by 38-points over Sacramento’s Austin Wood. Visalia’s Jett Barnes, Andrew Smith of Castro Valley, and Isabel Barnes of Brentwood make up the top-five in the series. The young drivers in Restricted race for 25-laps and $300 to win.

Manteca’s Brody Rubio has had an outstanding season in Jr. Sprints against a large field of young drivers. Rubio has visited victory lane five times and enjoys a 60-point lead in the championship. Oakdale’s Hayden Stepps won the opening night of the recent Clay Cup Nationals in Washington and sits second in the points at Delta. Levi Osborne of Millbrae, Pleasant Hill’s Vito Cancilla, and Bakersfield’s Blayden Graham are the top-five in the points. Jr. Sprints drivers compete in dual heat races with no time trials and a 20-lap main event, paying a minimum of $200 to win.

Tickets are $10 for adults ages 13 and up, $5 for kids ages 6 to 12, seniors 55+, and military, and kids 5 and under are free! Pit Passes can also be pre-purchased by competitors for $20 or purchased at the gate. Pit gates open at noon with the driver’s meeting at 4:30 pm. Hot laps and qualifying will follow.