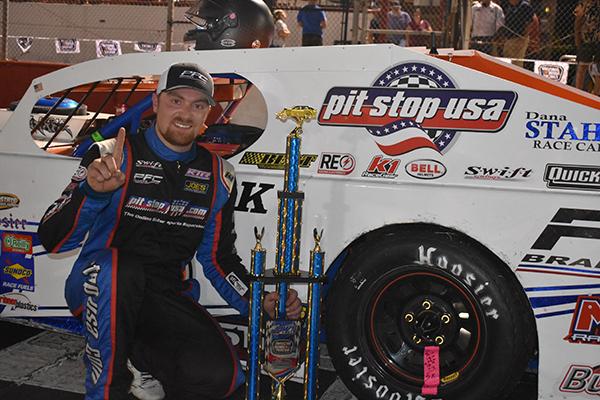 “Scott’s damn good here and always has been,” Tellstrom said. “I haven’t really raced here before. (But) I know how important it is to take your spot on the restarts and run hard through one and two. I got into Scott a little more than I like to there. It just all worked out really well for us.”

Tellstrom opened the festivities with a new North State track record at 14.134 seconds. Tellstrom lined up sixth for the feature. His teammate Kylie Keown started shotgun but surrendered the spot to Lakeport’s Ian Elliott on the start. Elliott led the way while Klamath Falls, Ore.’s Rich Cobb steadily drifted out of the top-five on the upper groove.

Winters went around the outside of Keown for second before she went to the pits with smoke off the rear tires. Elliott led lap five for the $250 Authority Heating and Air bonus. Keith Bloom of Anderson stopped in turn four for a caution on lap 24 with an apparent flat left front tire. The first restart attempt saw 2020 Jaws Modifieds champion Jason Philpot of Sacramento suffer a mechanical failure on the left front. Philpot sailed into 2021 Jaws points leader Eric Price, who also won the $100 Lucas Oil Dash for Cash, sending him spinning. Price was able to rejoin but Philpot was unable to continue.

The leaders raced side-by-side on the restart before Winters led lap 26 and Tellstrom followed suit on the outside to take second. 23rd starting Cody Braund spun from seventh for the next caution flag in turn two. Tellstrom had a tremendous restart, seizing the lead on lap 31. Darrin Sullivan and Elliott battled for third before Bloom spun again in turn four. Bloom collected Price with both restarting at the rear yet again.

Tellstrom cleared Winters on the restart while Colfax’s Ralph Bailey, Mike Gorham of Lincoln, and Sammy Nuno of Windsor battled for the Jaws Modifieds lead. They collided on the front stretch in a hard crash on lap 49 which brought out a brief red flag.

Winters went outside Tellstrom on the restart to lead lap 50. Tellstrom drove in deep in turn one with contact, taking the lead on lap 52. Tellstrom led lap 55 for the $250 Authority bonus and led Winters nose-to-tail across the finish line for the $1,000 Bob Lehman Classic victory. Sullivan, Dustin DeRosier of Cloverdale, and Bloom rounded out the top-five. Price managed to still top the Jaws Modifieds over Josh Blackwood and Tyler Mullican.

The Berco Redwood Late Model twin 35-lap features for NASCAR state, regional, and national points were split by Granite Bay’s John Moore and Napa’s Dylan Zampa. Loomis’ Michael Mitchell used the outside the lead the opening three laps of the first twin over Fort Bragg’s Aidan Daniels, before Daniels took the lead back on lap four. Mitchell eventually fell to sixth on the outside. Zampa challenged points leader Thomas Martin of Auburn for third before a red flag on lap 17. Calvin Hegje came to a stop on the front stretch with smoke under the hood.

Third-starting Moore took the lead on the restart and never relinquished it for his fifth triumph of the year, topping Zampa, Daniels, Martin, and Mitchell.

In the second feature, Loomis’ Chris Scribner used the outside to his benefit to lead the first five laps. Martin battled with Daniels for second before Martin claimed the spot in a three-wide maneuver on the front stretch. Martin then went inside Scribner to lead lap six. A pair of cautions fell for solo spins for Lane Anderson of Fort Bragg. Martin, Daniels, and Zampa battled in a close lead pack before Zampa earned the top spot on lap 23. Zampa scored his second win of the year over Martin, Daniels, Moore, and Kylie Daniels.

An outstanding 11-car field was in attendance for the Mini Cup/Bandolero Bonus Cash race which paid $500 to win. Bakersfield’s Logan Chambers made his first Roseville visit and took the lead from the fifth starting position on lap one. The first nine laps were caution-free before Lincoln’s Anthony Bean spun on the front stretch.

Chambers held the lead when the caution flew again for Molly Laires of Linden spinning in turn four on lap 14. Stockton’s Gage Wicke collided with points leader Colton Nelson of Auburn as they tried to avoid Laires. Nelson retired to the pits with damage. Chambers led the final seven laps ahead of 2021 Roseville race winners Evan Laires of Linden and Sam Wedehase of Kingsburg. Bean and Auburn’s Dayton Broyles were the balance of the top-five.

Eureka’s Brandon White became the latest winner in the Riebes Auto Parts Super Stocks. Four-time 2021 winner Josh Whitfield of Roseville had the pole after the invert. Phil Wilkins dropped out on lap nine while running third. White clawed towards Whitfield in lapped traffic by lap 10, but Whitfield got through traffic quickly. White and Dixon’s Tim Walters collided in turn three with Walters spinning on lap 21. White was able to continue.

White restarted outside Whitfield and the pair ran side-by-side. White led lap 23 before Whitfield led laps 24 through 26. White drove ahead when he crossed to the inside of Whitfield to lead lap 27. White led Whitfield, 2020 champion Andrew Peeler, Blake Disomma, and Galt’s Larry Thornhill at the finish.

Roseville’s Nathan Cleaver won his second consecutive F4 feature. Lincoln’s Brandon Frantz led the way for much of the event despite as many as four different challengers racing behind him. Frantz, Cleaver, and Matthew Fuhs lined up nearly nose-to-tail with Nevada’s Stephen Crook a few car lengths behind in fourth. Frantz suddenly slowed on the backstretch, allowing Cleaver to motor ahead on lap 19 for the win. Fuhs, Crook, 2020 champion Ray Molina of Roseville, and Frantz were the top-five finishers.

Granite Bay’s Cole Moore took his 17th checkered flag in the BMR Drivers Academy – a NASCAR Driver Development program – in a 35-lap contest. Hueytown, Ala.’s JoJo Wilkinson and Winnipeg, Manitoba, Canada’s Amber Balcaen went side-by-side for the lead at the start. Balcaen spun across the backstretch and tagged an infield tire for a caution flag. Balcaen continued with damage and finished third. Moore topped Wilkinson at the checkered flag.