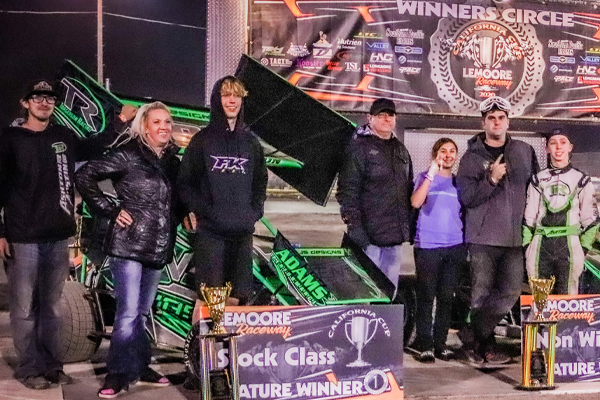 An outstanding field of 40 Non-Wing cars were part of the nearly 180 competitors that participated on Thursday night. Ashton Torgerson drove the #02 Ten-J Chassis to fourth quick in the first group of time trials, before finishing fifth in his heat race. Torgerson started third for the 25-lap feature, but immediately leapt into the lead when the pole sitter went wide into turn one.

Torgerson charged ahead to a commanding win while leading all 25-laps, while Austin Torgerson drove from the sixth starting position to finish fourth as well.

The 17-year-old driver went to work from the 12th position for the 25-lap affair. Torgerson knifed forward quickly, restarting fourth after a lap three caution. Torgerson used the low line to go three-wide for the lead, taking the top spot in lapped traffic on lap eight. Austin Torgerson earned his eighth victory of the year by a two second margin.

Saturday’s championship finales offered an outstanding purse for the competitors involved and a great opportunity for Torgerson Racing. Ashton Torgerson earned a sixth place in Non-Wing to go along with 12th in Super 600. Austin led the team’s Saturday results, driving from fourth on the grid to finish second in Stock 600. In the 40-lap Non-Wing feature, Austin finished fifth and just one spot ahead of his brother Ashton.

With a successful Cal Cup where all four Torgerson Racing entries made their features all three nights, Torgerson Racing will continue trophy hunting at the Lonnie Kaiser Memorial at Dixon Speedway. Complete nights of racing will take place both Friday and Saturday.

Torgerson Racing has opportunities for additional sponsors and partners as the team prepares for a string of special events throughout the closing months of the season. To learn more about Torgerson Racing, visit them at their new website www.TorgersonRacing.com Torgerson Racing is also available on Facebook, Twitter, and Instagram.